Powerwashing Flyers that took business from zero to $13,202 per month

I’m posting this guest post because I LOVE IT when people get their hands dirty in order to make money.

I think there’s more lessons to be learned by getting out there and doing small jobs than any amount of reading blog posts.

Using some basic copywriting principles in his marketing, Peter went from making $0 with his powerwashing service…to doing $13,202 per month!

So here’s Peter showing the exact business flyers he used to “automate his marketing” instead of going door-to-door.

Watch for the subtle psychological things happening with each flyer:

There was no way in hell I was ever doing that again…..

I had just gotten back from going door-to-door trying to sell power washing after hearing from my Dad that it was “a good business to get your feet wet.”

After 2 or 3 anxiety-filled hours of stuttering my way through a pitiful little sales pitch and getting zero results, I gave up.

I don’t know if you’ve ever gone door-to-door before, but for me, especially at the time, it honestly felt like I could have been offering FREE money and people still would have said no.

If you’re at all introverted (like me), or you’re not the smoothest on your feet, then you gotta knock on like 100 doors before you find someone….and it’s absolute agony the whole time.

So, unless you’re trying to get over your fear of rejection, don’t try powerwashing this way.

I’m going to show you exactly how I went from $0 to over $10,000 a month without ever knocking on a door or making a cold call.

The First (lame) Attempt at Marketing:

After deciding I was never going to go door-to-door ever again, I designed a beautiful flyer, that looked something like this… 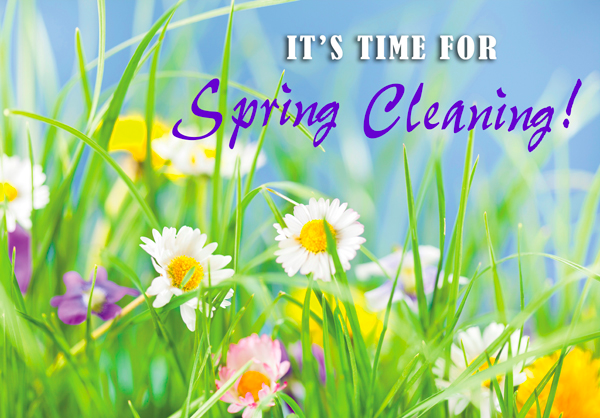 It was so pretty and nice….

….but it absolutely BOMBED!

I got my friend to deliver a couple hundred of them and I didn’t get a single phone call.

I was shocked… (what an idiot I was).

Now if you’ve been following Neville for any period of time, you’re probably a lot smarter than I was at the time.

But I was stressing because I had no idea what benefits I could show.

I started thinking what it was going to look like I was going to have to get a job unless I figured out this whole marketing thing QUICK!

So, I went to my Dad, hat-in-hand, with my “beautiful”, terrible little flyer and asked him what I was doing wrong…

He laughed, handed me an old Dan Kennedy book on direct response marketing and a few chapters later, I threw away my first “beautiful” attempt.

I started again from scratch.  This time I didn’t care if the flyer was “beautiful” or “professional looking.”  I realized that didn’t matter.

The Second Attempt At Marketing

Here’s what I came up with my second time around: 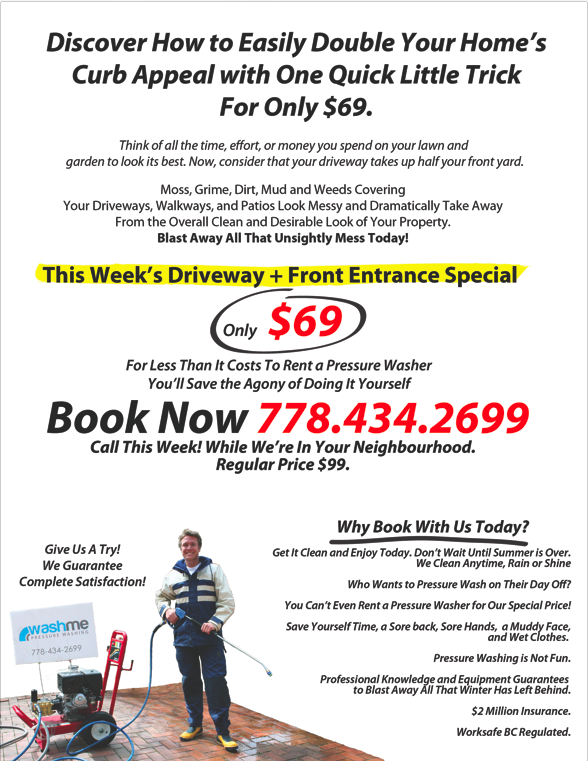 I printed out 100 of these new flyers on my little inkjet and got my friend to deliver them to a local neighborhood.

But I was still scared, because after my first failure, I remember thinking, “there’s no way I’m going to get calls…”

I didn’t even know what to say when I answered… I hadn’t really thought that part through!

But it didn’t really matter… my new customers did most of the talking (you’ll find people LOVE to tell you all about their situation).

Within a day, I got 4 new customers and which ended up turning into around $600 dollars in business.

It blew my mind!

I thought, “Hey there’s a lot more neighborhoods…..and if I just send out more of these flyers….I should get a bunch more customers… this is so much better than knocking on doors!”

When I met with the first customer, I didn’t suddenly learn how to become a sales star or even a smooth talker, or even know what the concept of an “upsell” was.  But I found out quickly.

Usually when people call you to powerwash their driveway, they like to walk around with you tell you their life story and while they’re at it, also show you what they want cleaned…

And usually, there’s a bunch of other dirty stuff right beside the thing they want cleaned.

So there was one thing I would say that worked really well with making more money. It honestly just seemed natural to ask it.

I would just ask:

People go… “Yea, geez… hmm yea. I didn’t think about that but now that you mention it can you clean that to?”

I feel like an idiot when I don’t ask… which is a little too often.

So I quickly learned that I just needed to send out more flyers to get more customers.

I bought a bigger printer and I hired my friend to go out on his rollerblades and deliver 1,600 flyers each week at $0.18 cents per flyer. (At the time I didn’t know about Every Door Direct Mail in the U.S. or Unadressed Admail in Canada… which is what I do now and actually cheaper and more reliable than my friend).

And like clockwork, I would get at least 15 jobs… enough to keep me fully booked for the whole week.

It would cost me on average $25 to get a customer… and I’d bring in on average $200 from each customer right away… that’s 8x my money, which is pretty awesome math.

And as long as these flyers kept being profitable… I kept sending them out.

Mailing 16x to One Neighborhood and Still Getting New Customers:

It was amazing how I could tweak the flyer a tiny bit and send it to the SAME neighborhoods every other week and I would still get more and more people calling in!

One neighborhood in particular, I sent flyers to them 16x one summer and it was still profitable in bringing new people in:

People’s circumstances change and you’ve got to be there when they do.

By hyper focusing on neighbourhoods, you can quickly become the dominate player and can quickly end up cleaning 20% or more of the homes in an area.

Getting Neighbors as Customers Without Door Knocking:

For a service business like this… you make a lot more money by not wasting time and gas traveling long distances between jobs.

I’ve been able to stay busy in a small town with 5,000 homes and not have to venture out to any of the surrounding areas by doing three things: 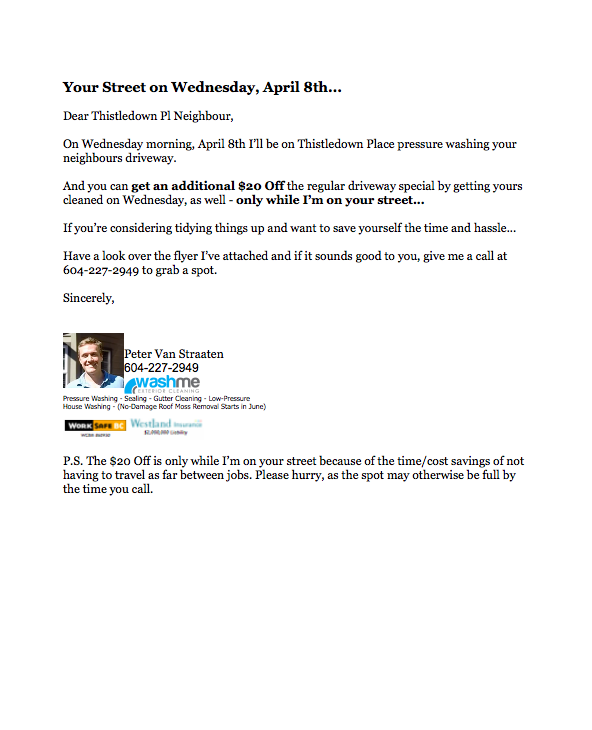 The second thing was by having a sign and wearing high visible reflective gear: 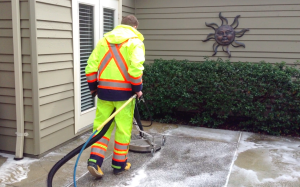 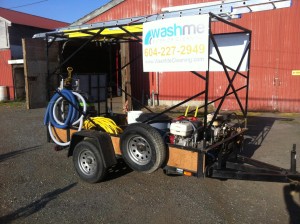 I was such an idiot in the beginning and went without a sign for a long time!  As a result people didn’t realize I was for hire. 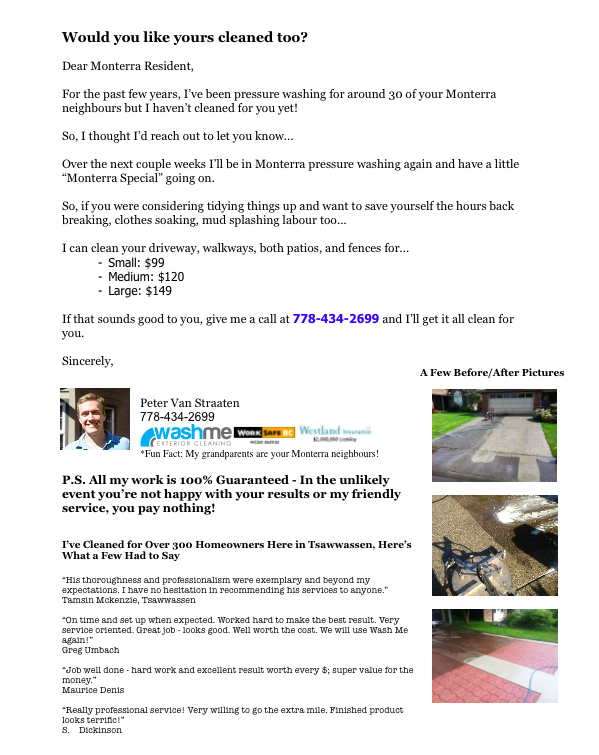 I hope you would.

Because that’s how I got 45 out of 90 homes in a neighborhood to become customers, which has so far resulted in more than $21,000 in business.

After cleaning a few driveways I started to notice something very interesting:

As soon as I cleaned someone’s driveway and they were able to see what a difference it made and how awesome it was to save 5 hours of back breaking, clothes soaking, mud splashing labour… it was like a switch had been flipped…

It was like suddenly they were the kind of people who clean their home and pay someone to do it for them.

They’d inevitably ask me if I could clean a bunch of other stuff for them and it would result in each customer being worth anywhere from $200 to as much as $2,000.

And it really got me thinking…

If I can just get someone started and committed to taking that little baby step, then the rest becomes really easy…

So, I picked a gated community of 90 homes, where I had already done some work and I sent out this letter for a free driveway cleaning: 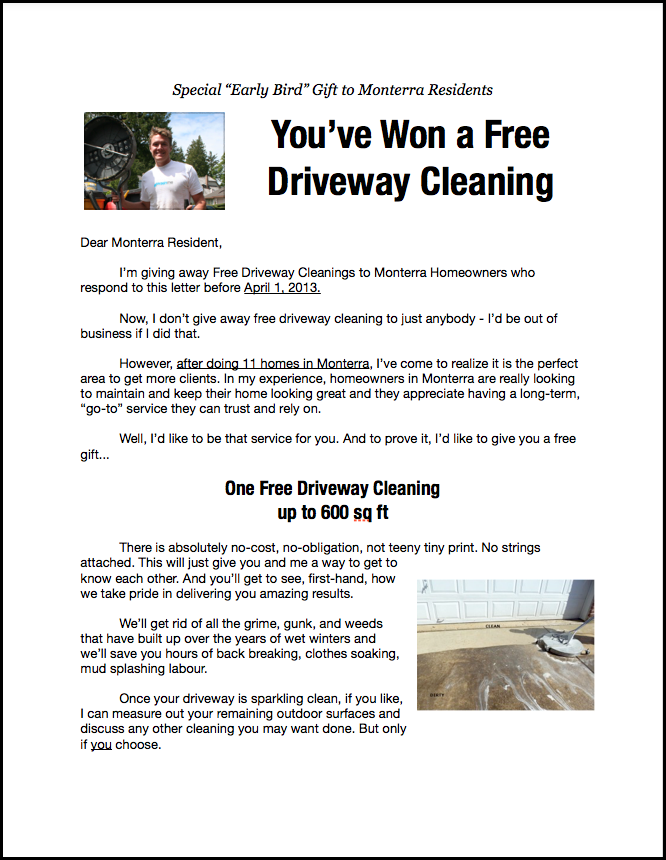 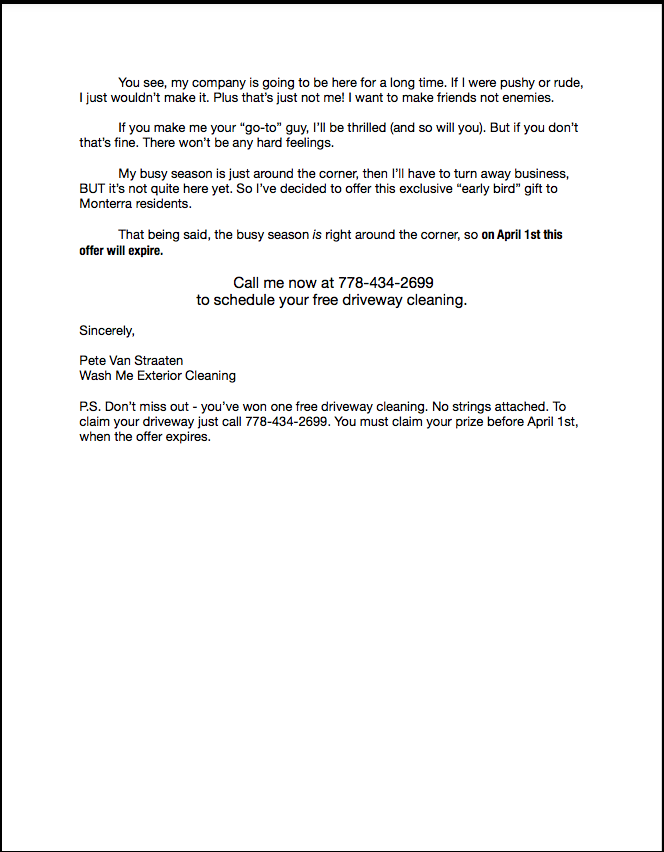 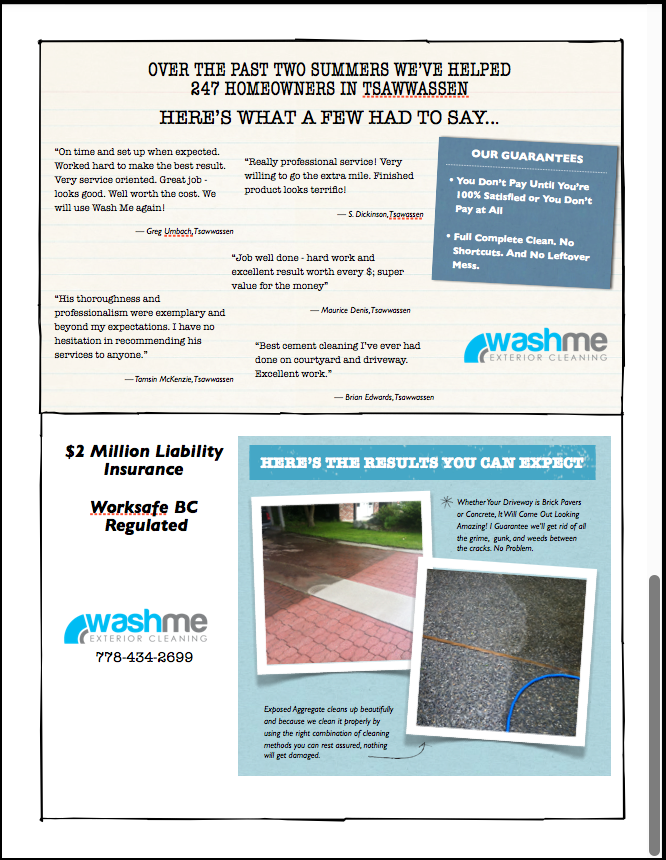 I ended up getting 42 of them to become customers and it has resulted in over $21,000 in business!

The key to scaling up from the $6,202 was to make sure I kept the “customer getting system” up and continuously working.

If you rest on your laurels and get lazy (which happened to me more than once), the business starts to dry up.

At first I was going door-to-door myself trying to get business.  This didn’t work at all….not to mention it was extremely stress-inducing for me.

However when I started using copywriting principles to automate my marketing through flyers, it effectively got me from $50 an hour to being able to make $150/hr or more.

Isn’t it pretty sweet how he found out that:

Essentially the flyers were automating the job Peter was manually doing.

With concepts learned in the KopywritingKourse it’s easy to see why this “pretty” flyer failed:

The flyers that did really well look ugly…..but they seem personal, genuine, and offer a real benefit to the reader! 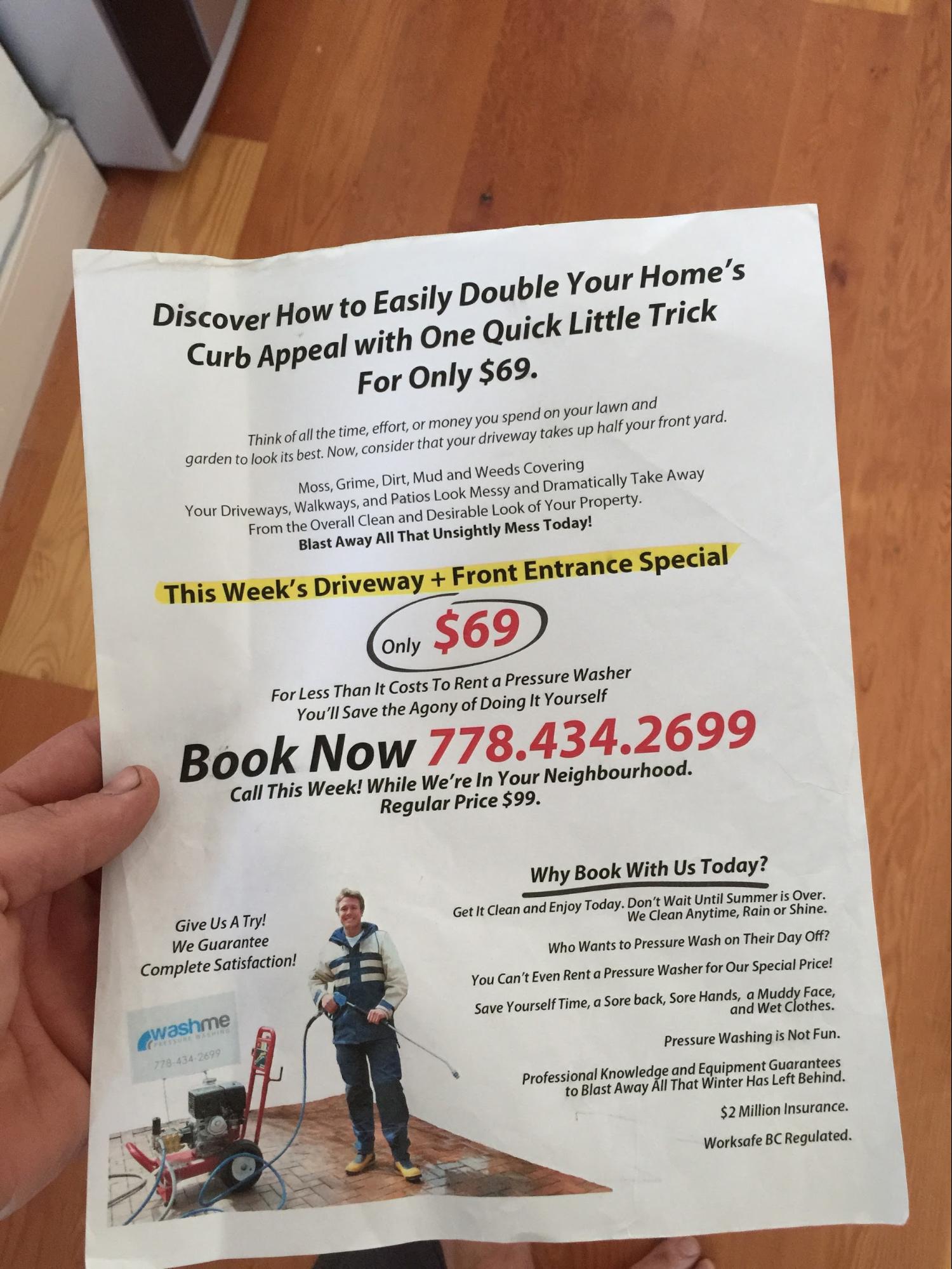 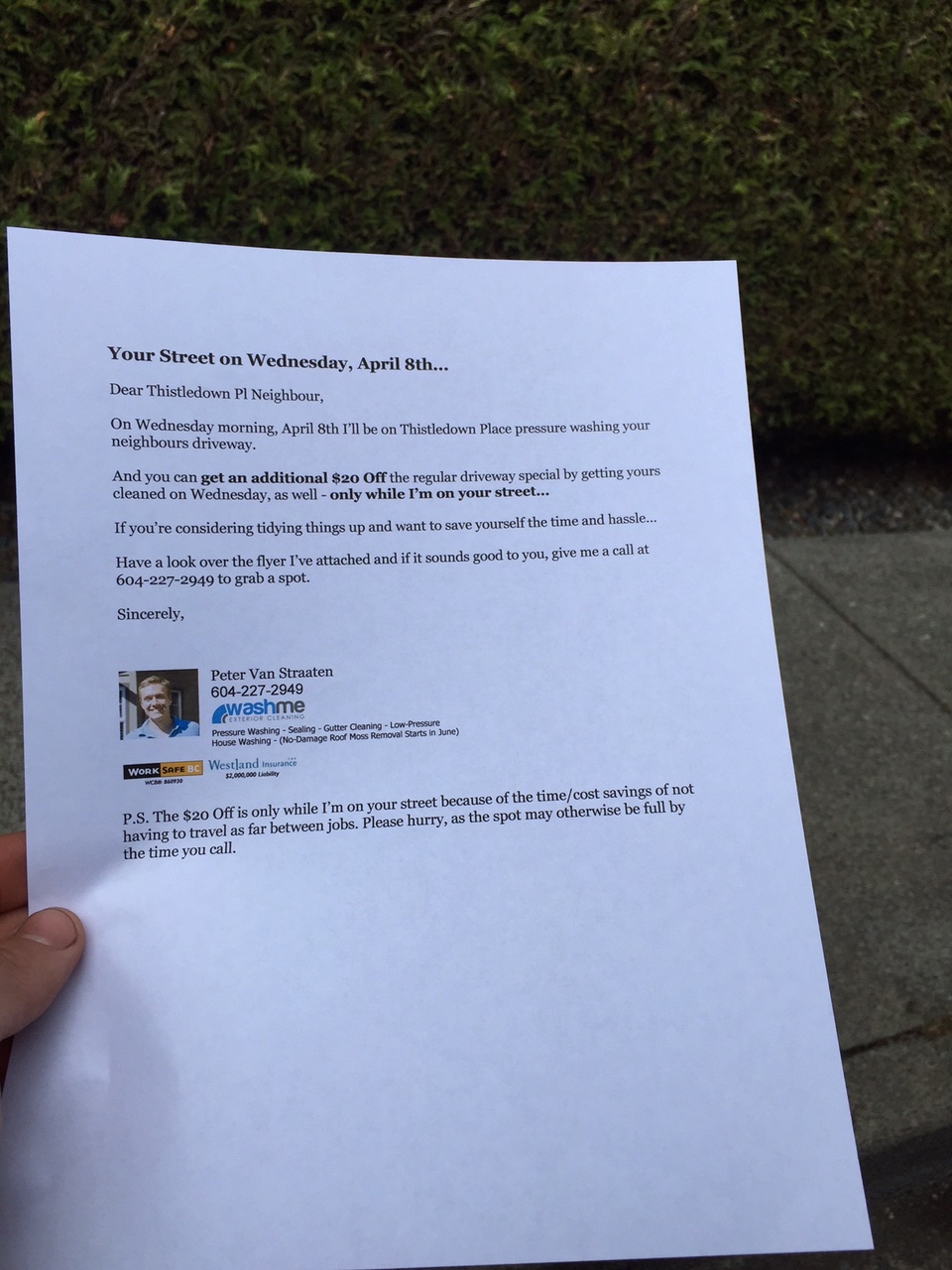 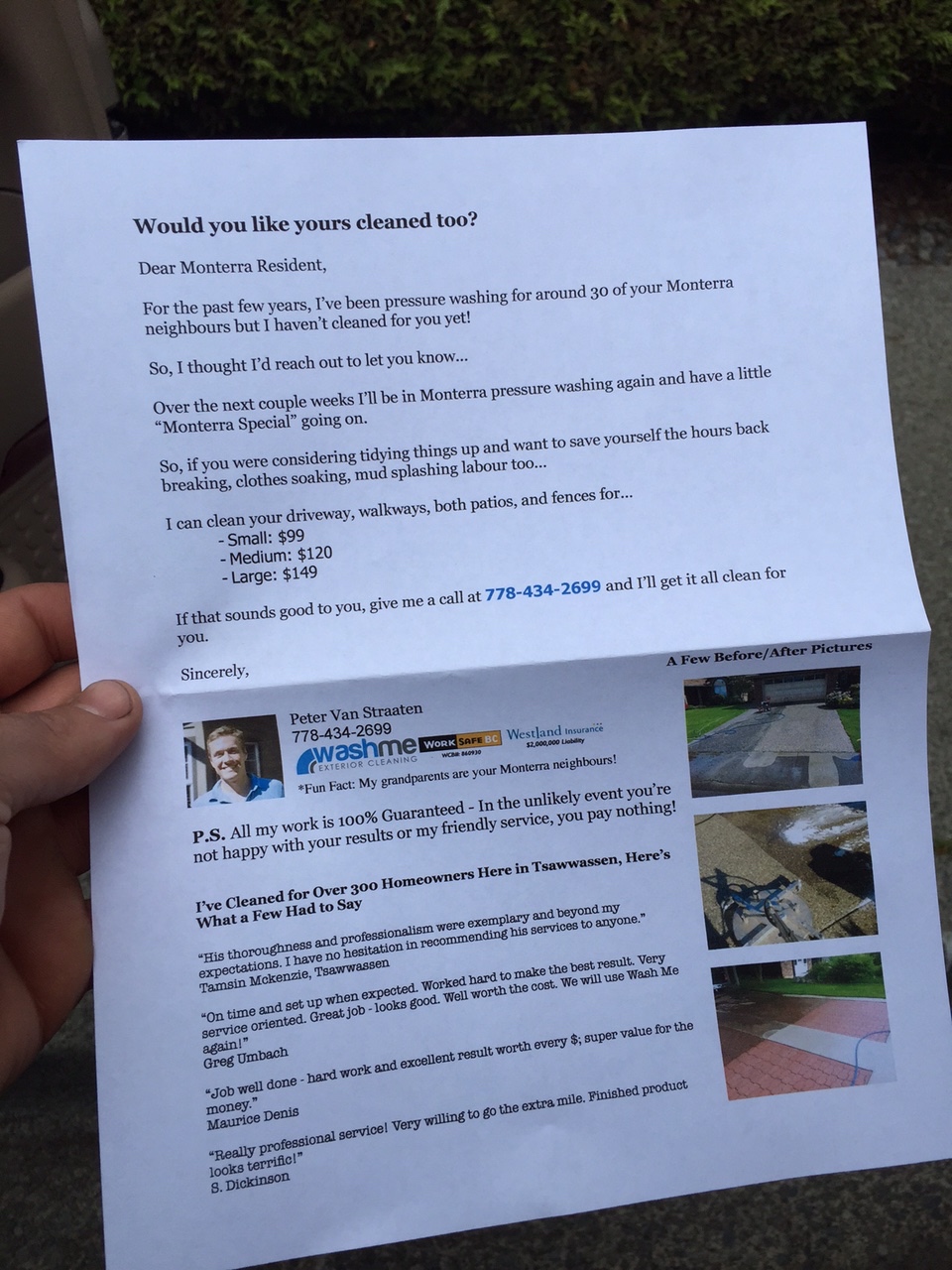 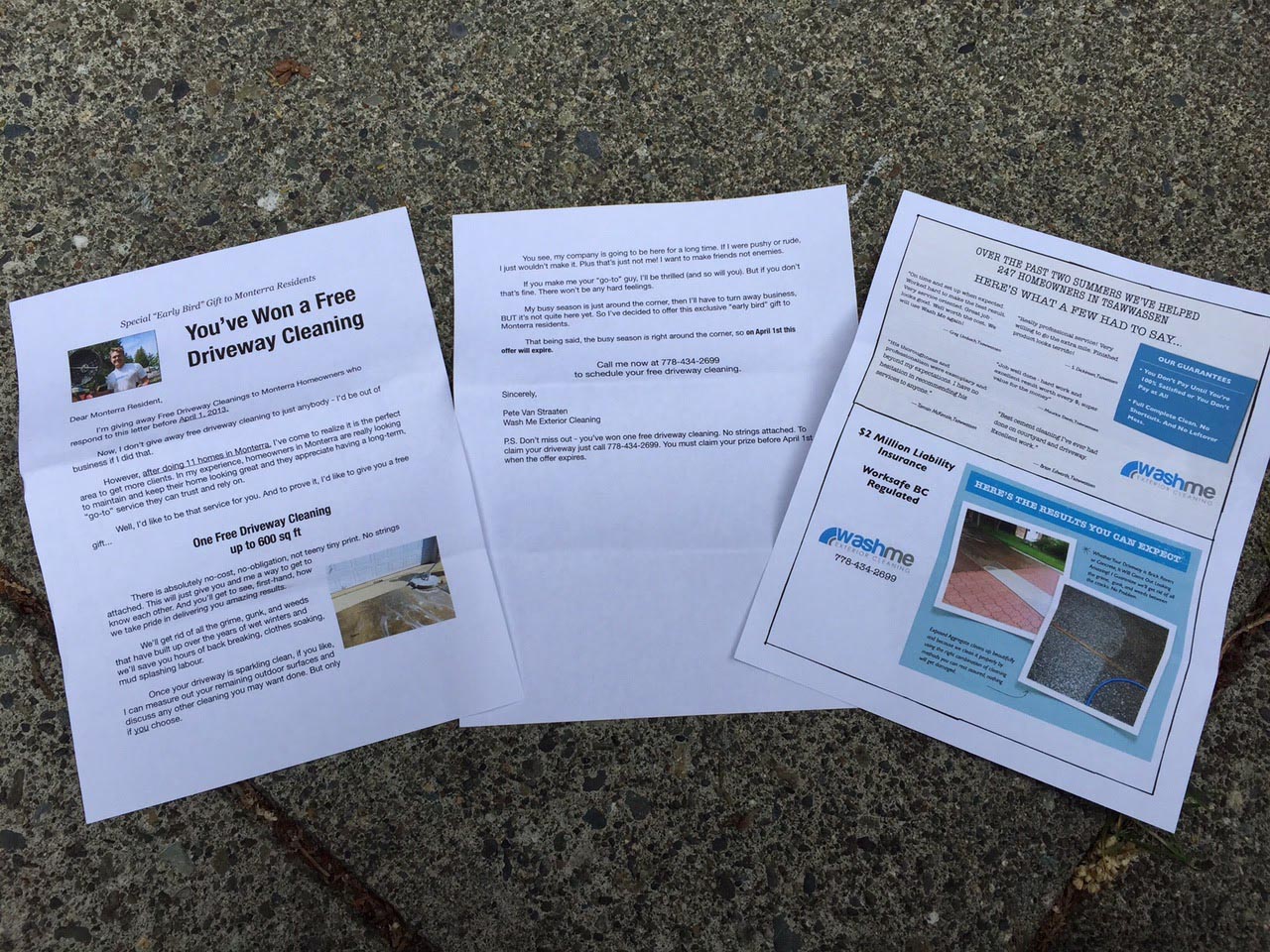 If you’d like to know more about the psychology behind flyers like these and how to write your own copy that sells, checkout The Kopywriting Kourse. 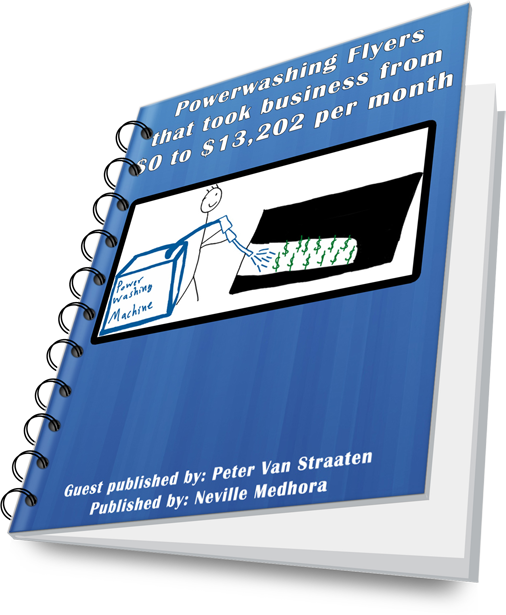 P.S. There are many more direct mail marketing examples you can see here (including markup on how to improve them).

P.P.S. If you want to get the editable templates for these powerwashing flyers join the Kopywriting Kourse:

Get editable templates for these powerwashing flyers when you join Kopywriting Kourse: 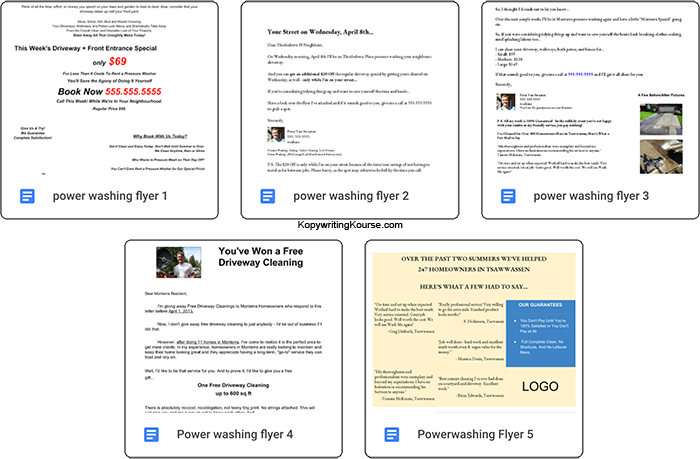 As a member you get instant access to all the templates:
– Yours to modify with your own contact info, text, images –
– Download in Google Docs or Microsoft Word format –
– Easily edit them in your web browser –
– Print them for your own business –
– Join here –

Content Marketing Guides:
What Is Content Marketing?
Writing Advertorials
Easiest Font To Read
S&P 500 Company Slogan
Effective Sales Letters
Social Proof
Getting A Sales Page Designed
How To Write A Restaurant Menu
How To Write A Newsletter
How To Write An About Page
How to Get Your Posts Seen
Real Estate Flyers
Make A Target Customer Profile
Get First Photography Job
Content Writing Vs Copywriting

Copywriter Mentality:
What Makes A Good Writer?
What Is Creativity?
Writers Block
Copywriting Quotes
The 90-9-1 Rule of Groups
Process Vs Outcome Goals
Become a Triple Threat
Psychology Of Marketing