We rented a KopywritingKourse billboard for $904 for a month! [Jump down to see].

However in researching how to buy a billboard, it was nearly impossible to find much helpful information.

So we’ve compiled everything we’ve learned about advertising on a billboard into one helpful guide:

Where to buy billboards:

Billboards are all fragmented. You can have individual Mom-And-Pop style outfits that sell space on their private billboard, or big companies like Lamar Advertising.

Here are the top 10 billboard advertising companies in the United States:

If you enquire about advertising with them, you will most likely be assigned a local “billboard broker” who will help you.

How Much Does a Billboard Cost (Pricing)?

Printing a billboard is between $400 and $1,000 depending on size. I was actually surprised how cheap this part of the process was.

For some reason I assumed printing 300 sqft of sign would be extremely expensive. However the cost was pretty reasonable.

Just like real estate, it completely depends on WHERE you want your billboard.

After requesting samples of billboards we could rent around Austin, here were 3 billboards within our $1,500/mo budget: 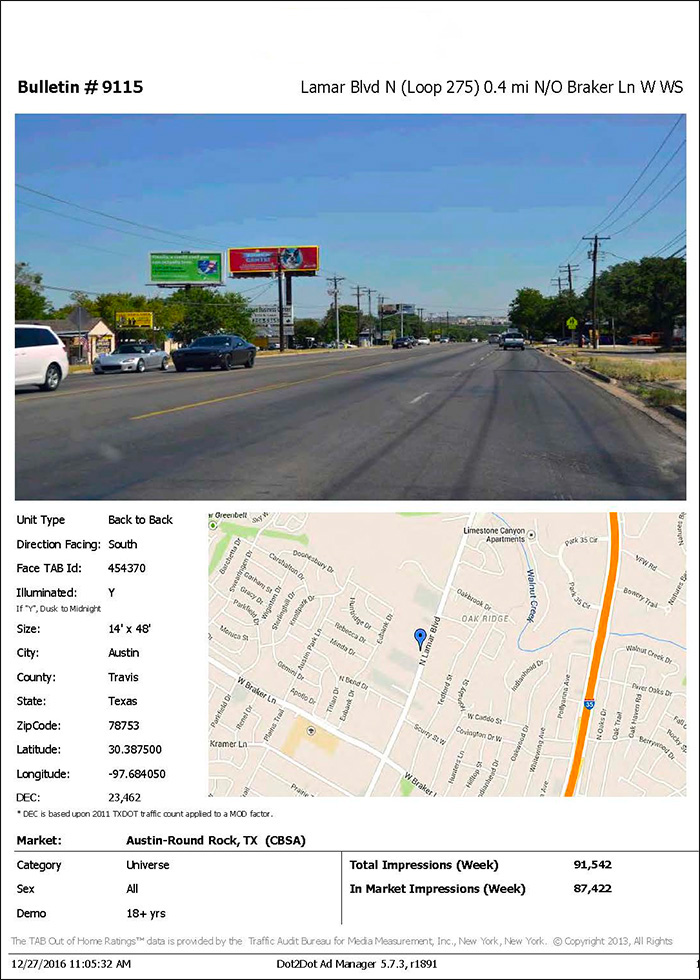 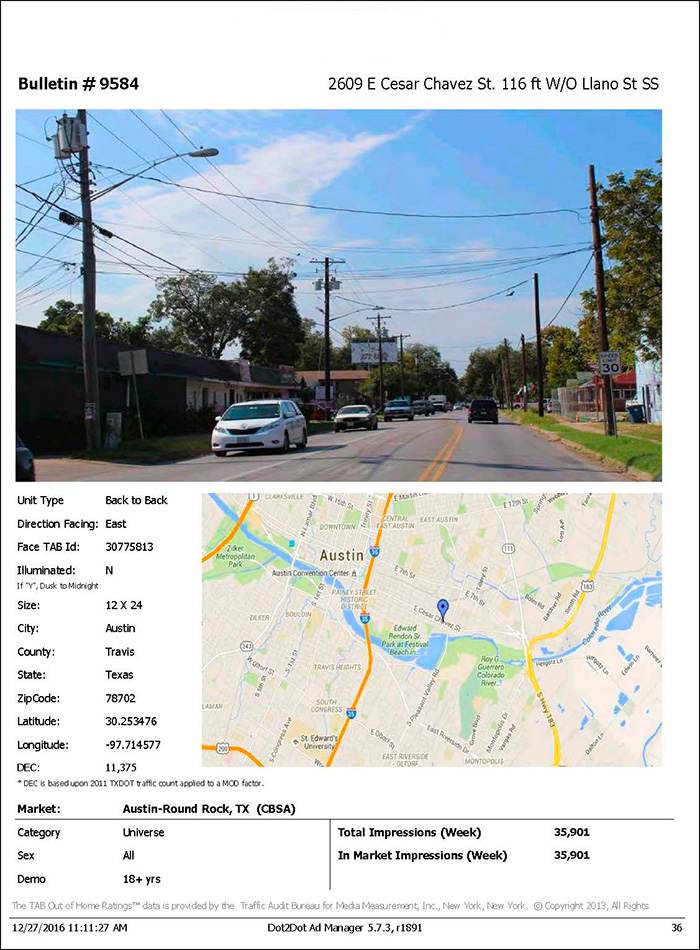 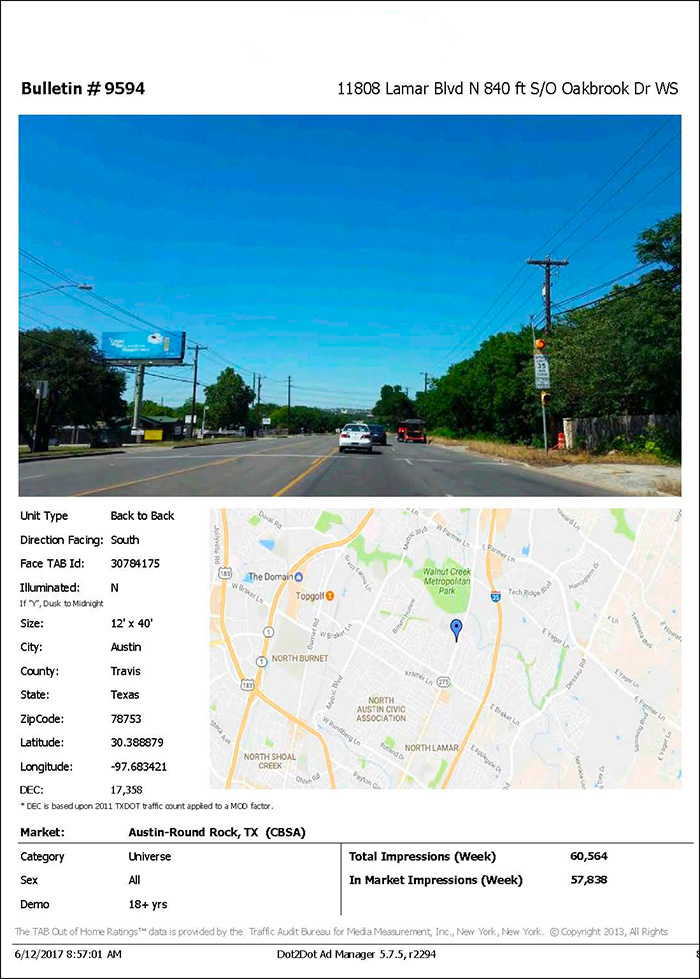 Since we’re spending all this money as just a “fun experiment” I decided on the cheapest billboard. After all the printing, rental, and taxes, the total cost of the billboard came to $904.

The way billboards are sized is with a “sheet” system.

Billboards are divided up into “sheets” that comprise of 27″ x 40″ inches sheets. Each sheet is limited to how big most commercial printing machines can print.

The more sheets you have on a billboard, the larger it is (duh).

The billboard we decided on was small enough (12′ x 24′) to be printed all at once with a huge vinyl printer. Here’s the box it came in: 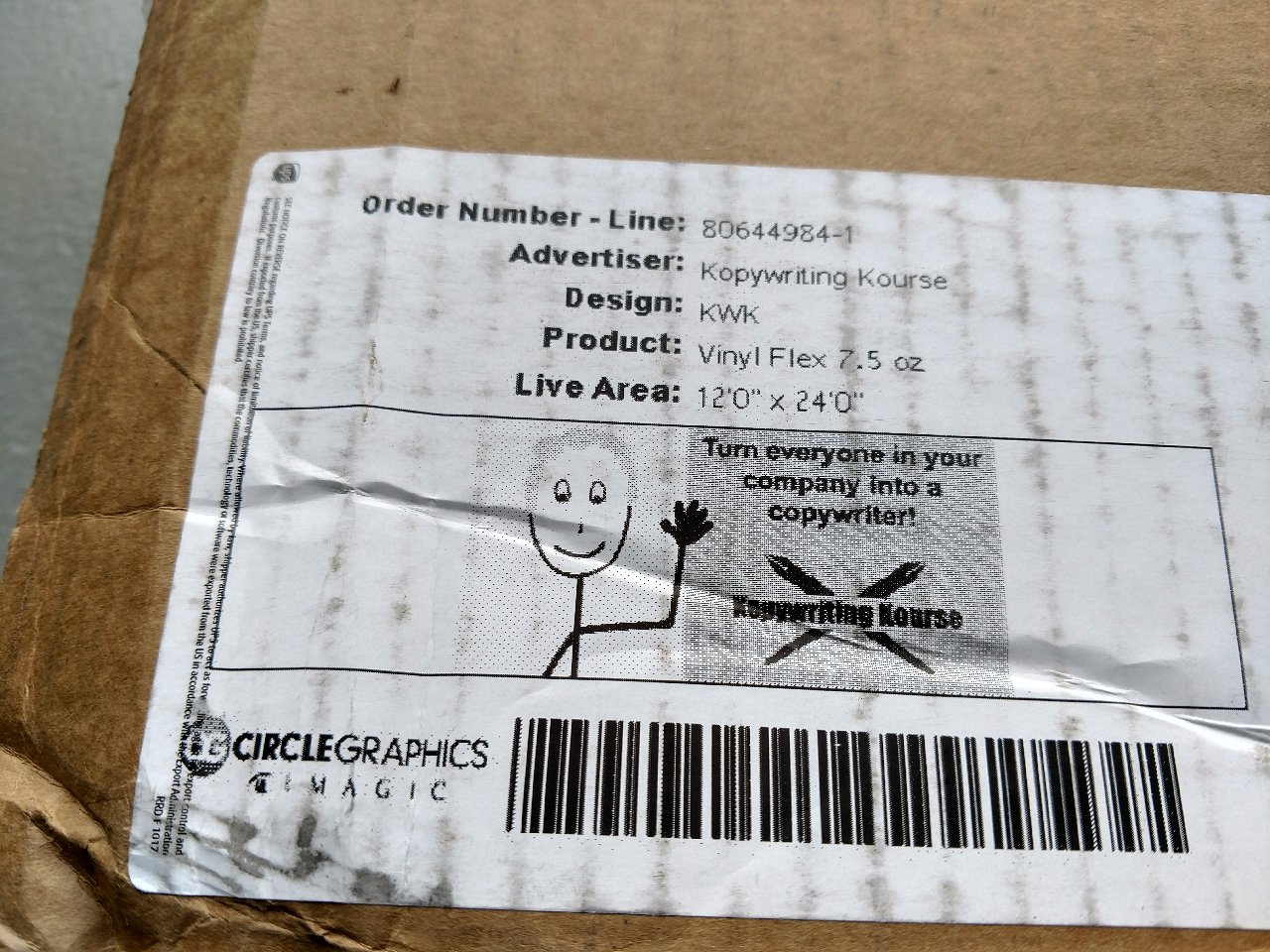 How to Design A Billboard:

There’s some interesting best practices when it comes to designing a billboard.

So here’s the information and best practiced we gathered from speaking with billboard designers and brokers.

Readability is important with billboards, so you want to have hella big text. Also people are generally driving by a billboard and only see it for 2-5 seconds.

Rule #2: Try to use an eye-popping background.

Using a plain-white background isn’t as grabbing as a bright yellow or red background. It’s your job to make the billboard “pop” as someone passes by.

What I was told was the overwhelming majority of people who want to learn more information from your billboard will simply Google the logo or name they see. Rarely will someone remember and type in a web URL.

If you want people to remember your company, you should make the name (or logo) very large.

From what we gathered, those are the primary guidelines for billboards. If you have any other advice, share it in the comments!

However we tried out 11 different versions of the billboard with slight variations between each. We then put each draft through a visual attention simulator to see where people were most likely to look at each version.

Our design specs for the billboard were aa follows:

Below you can see all 11 versions of our initial billboard drafts (with visual heat maps and eye tracking): 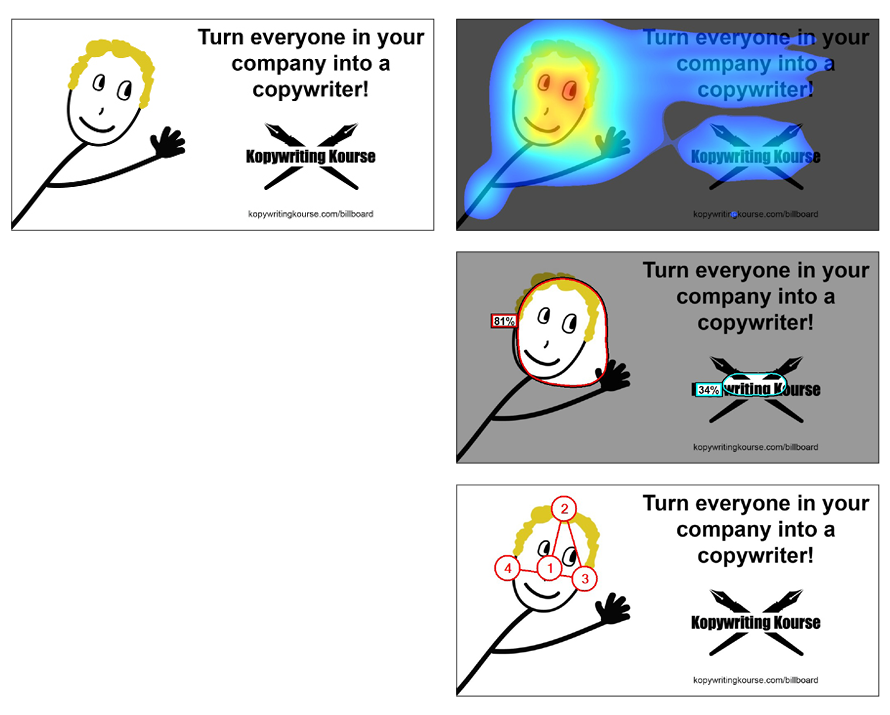 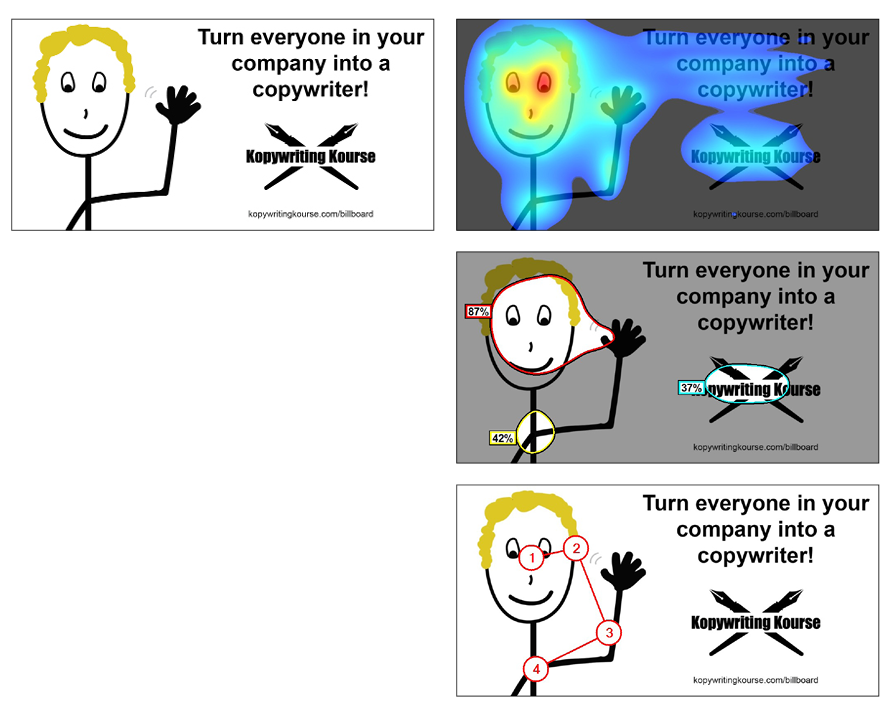 Plain white background. StickPerson looking up and to the right. 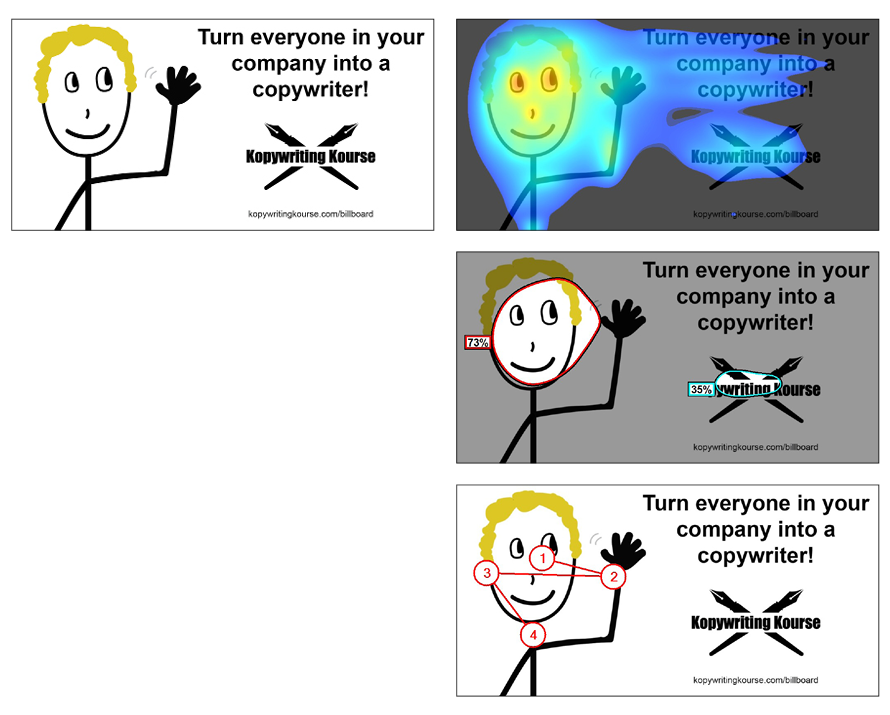 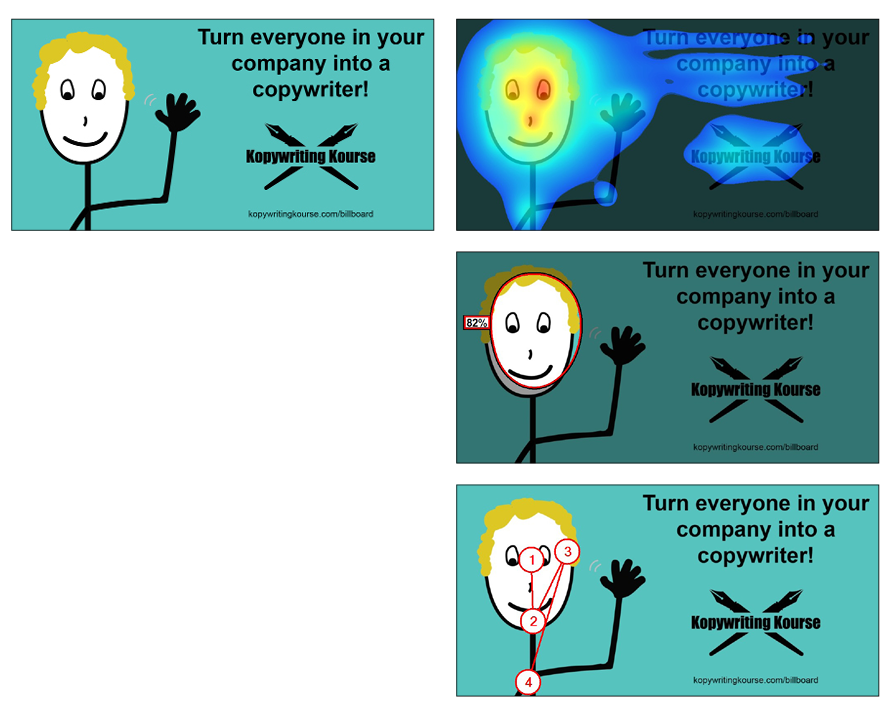 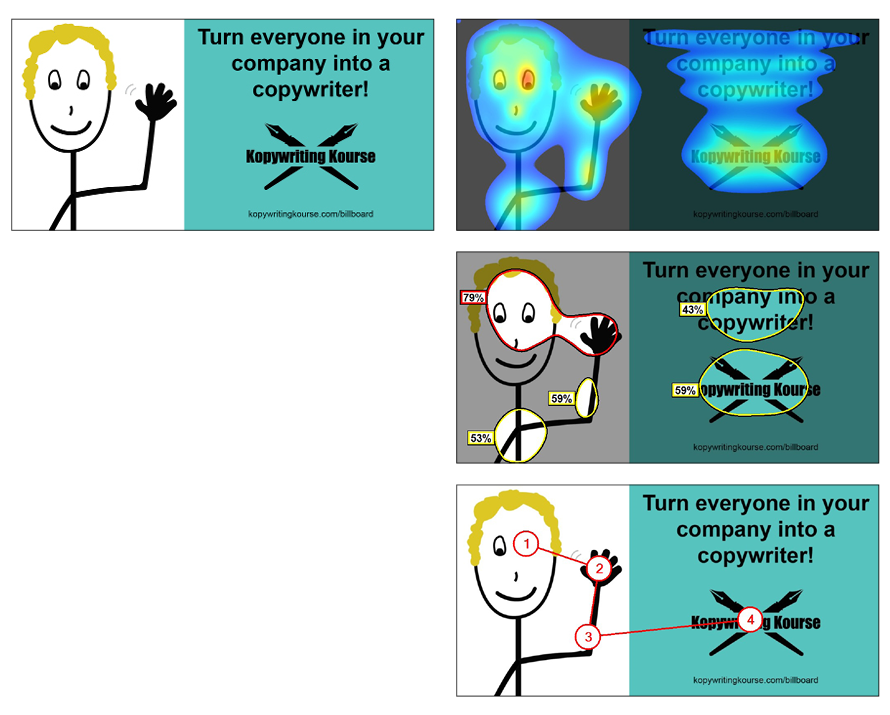 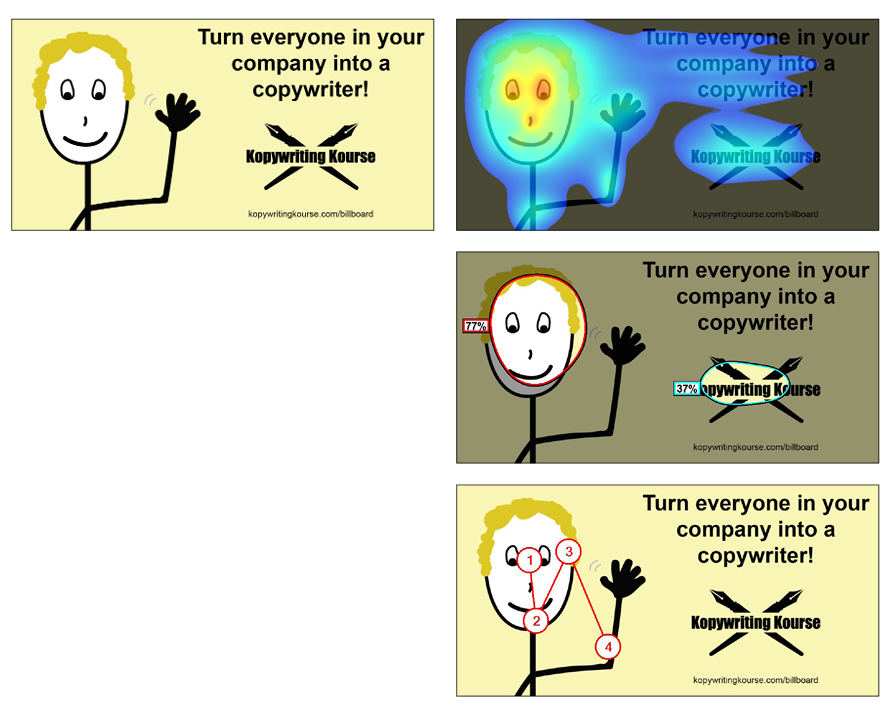 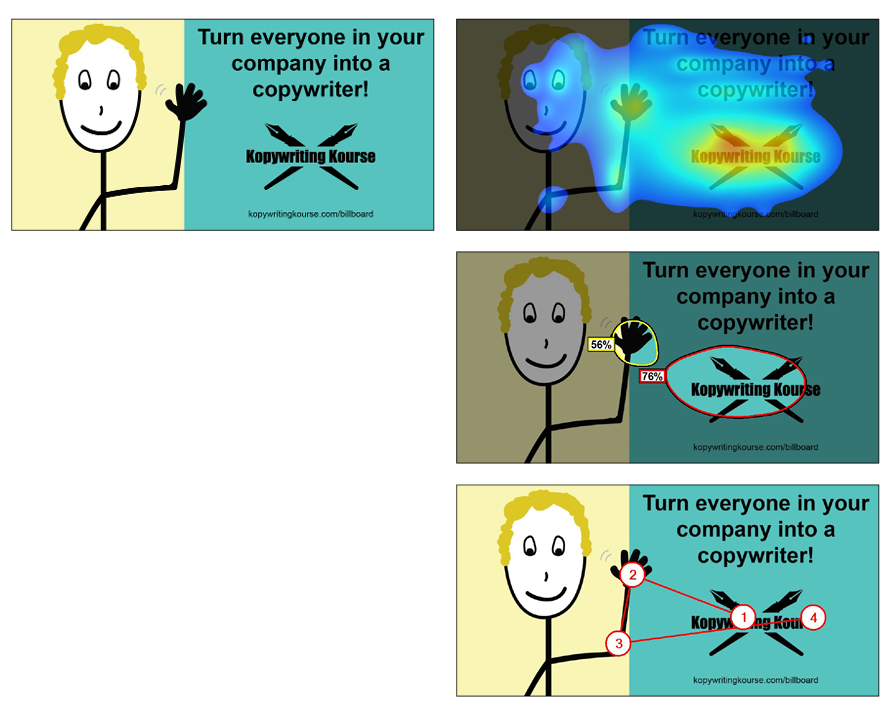 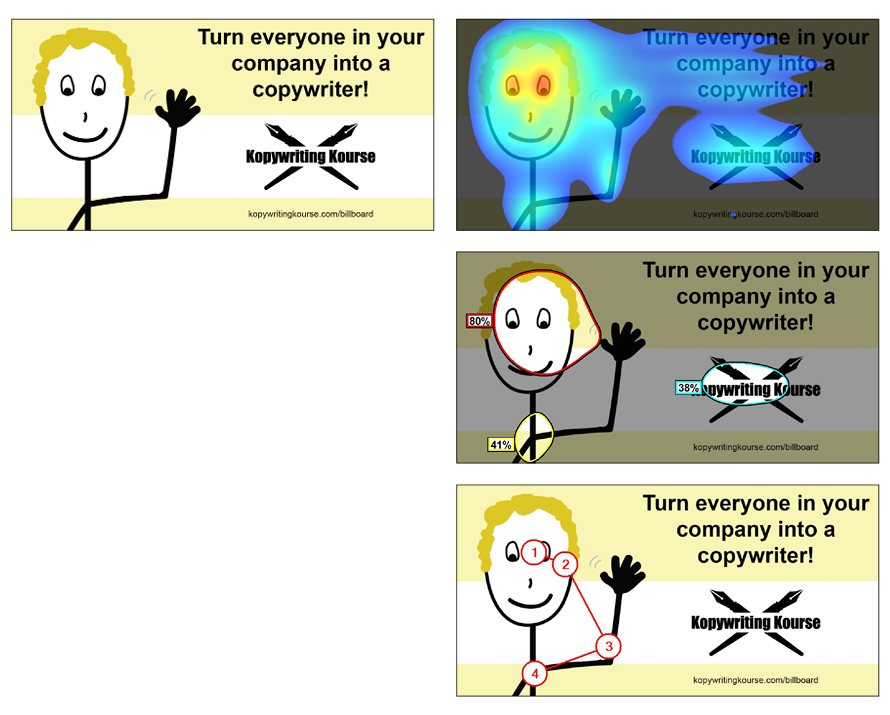 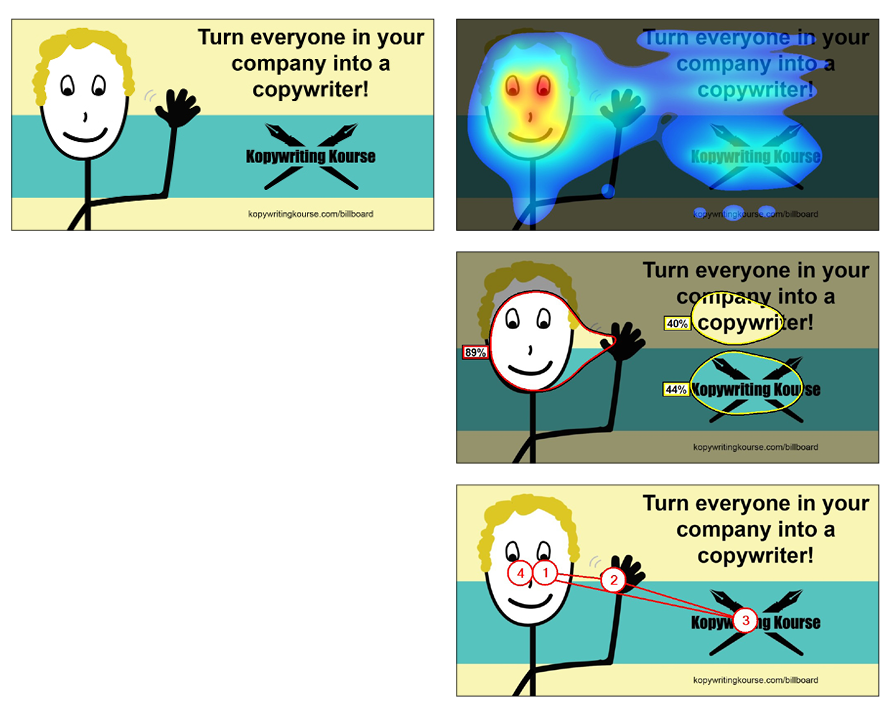 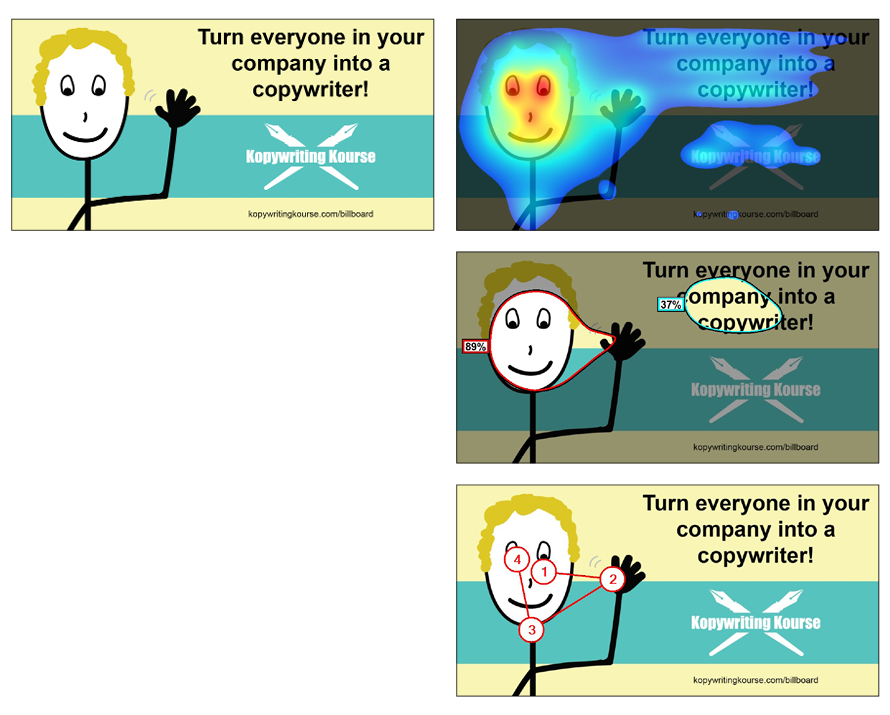 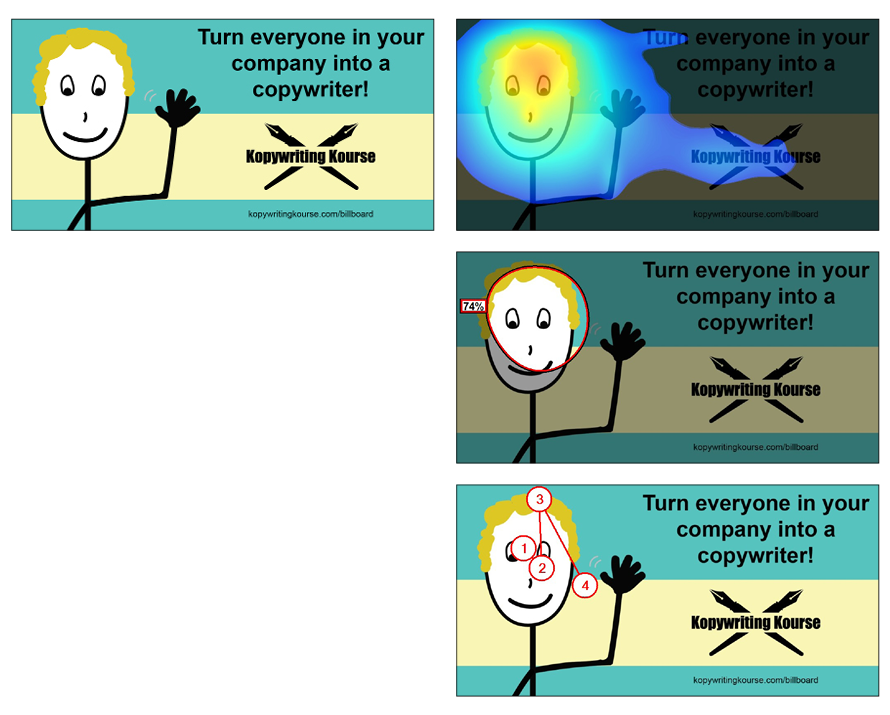 We originally put a web URL on all the designs, but in the end the head designer gave us this sage advice:

People now days will jump on their phone and google text from a billboard. We do not recommend adding a URL on the board unless it is the entire board. Even then the majority of people will just search and not type the URL. The URL will not be legible with the rest of the text and the image especially because this board is not very large. Jared has sent me a screen shot of the logo enlarged to cover the URL. This allows the logo to be larger. The logo is the take away from this board and if it’s not large there will be no take away.

Also for billboards to work they need to be 7 or less words. Successful billboards follow the less is more motto. We recommend “Educate your company in Copywriting!”.

So after spending a total of $904 and about 2 weeks of back-n-forth with the billboard broker, here’s what came out.

Here’s two examples of how the billboard looked before we rented it: 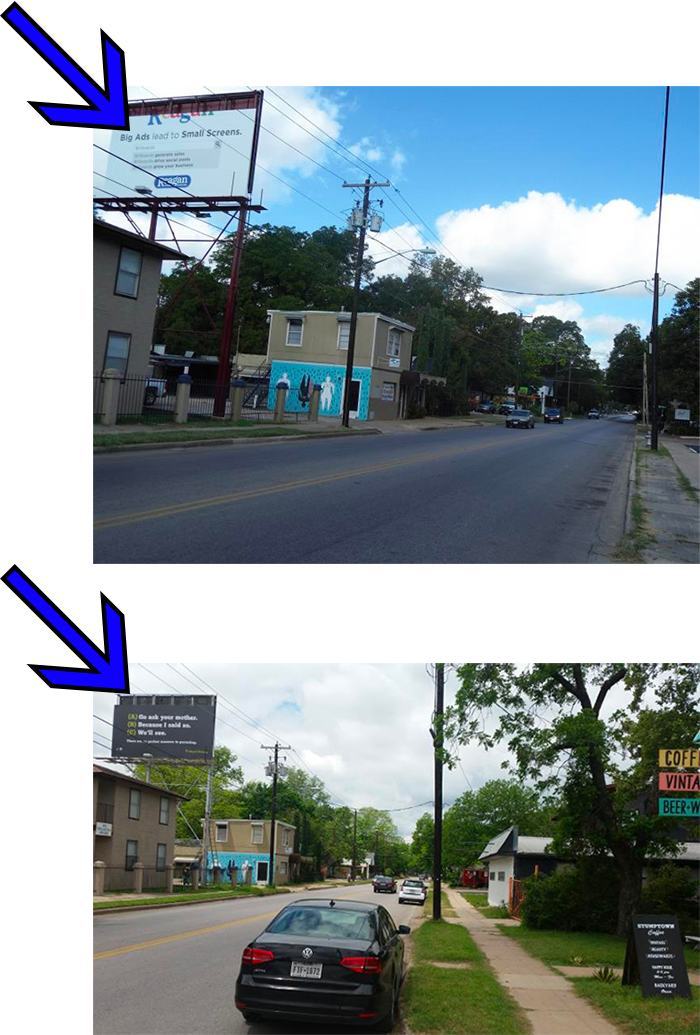 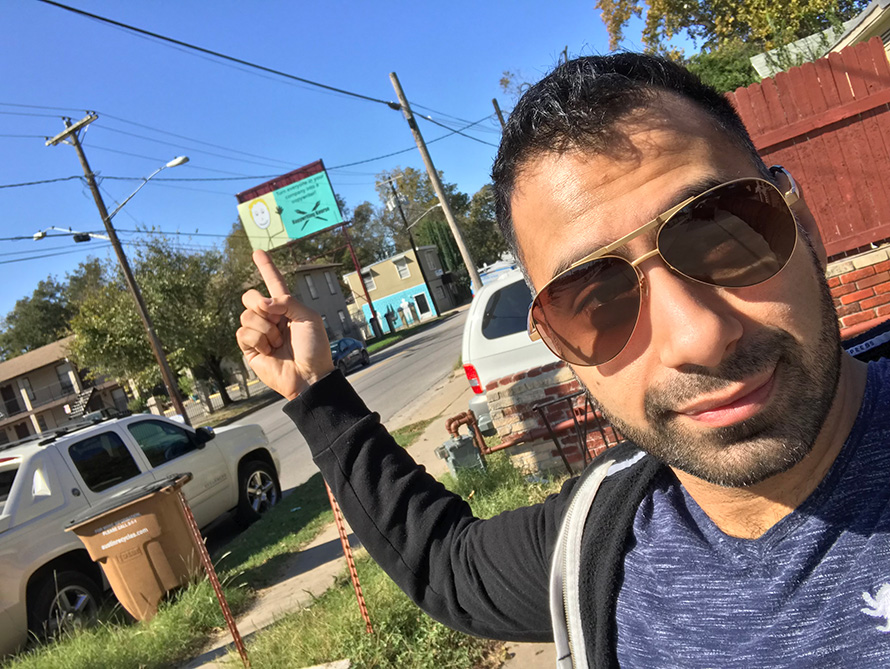 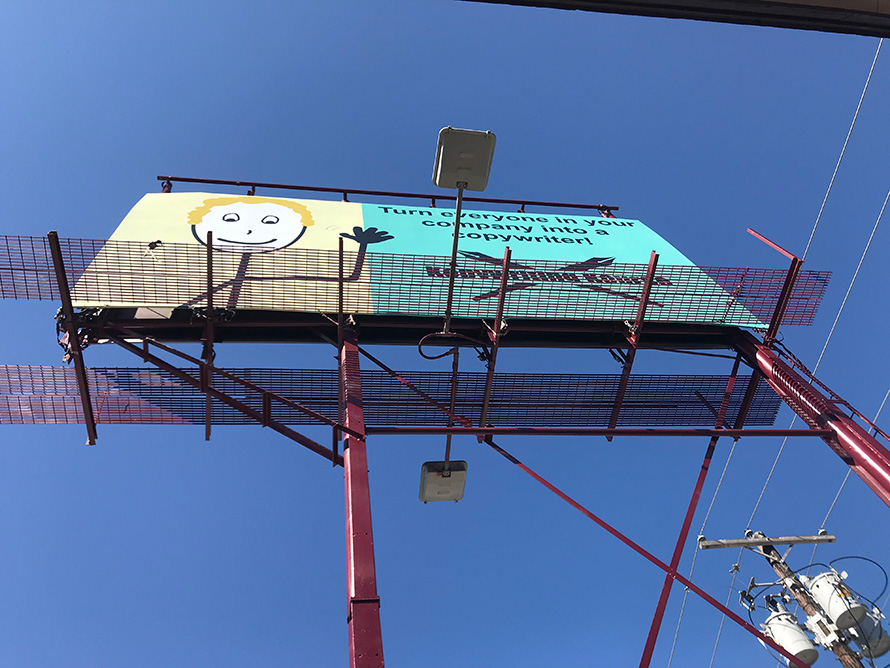 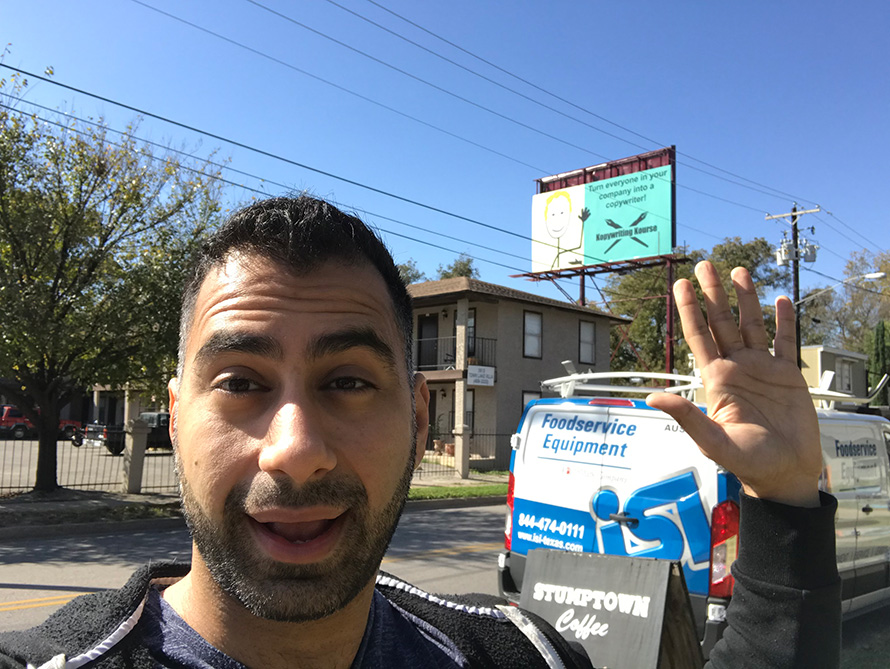 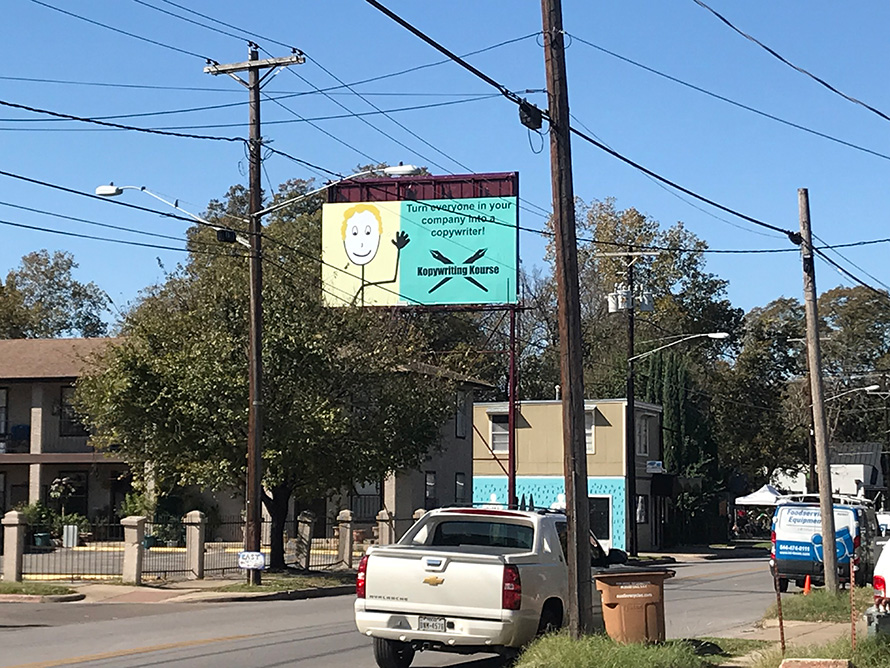 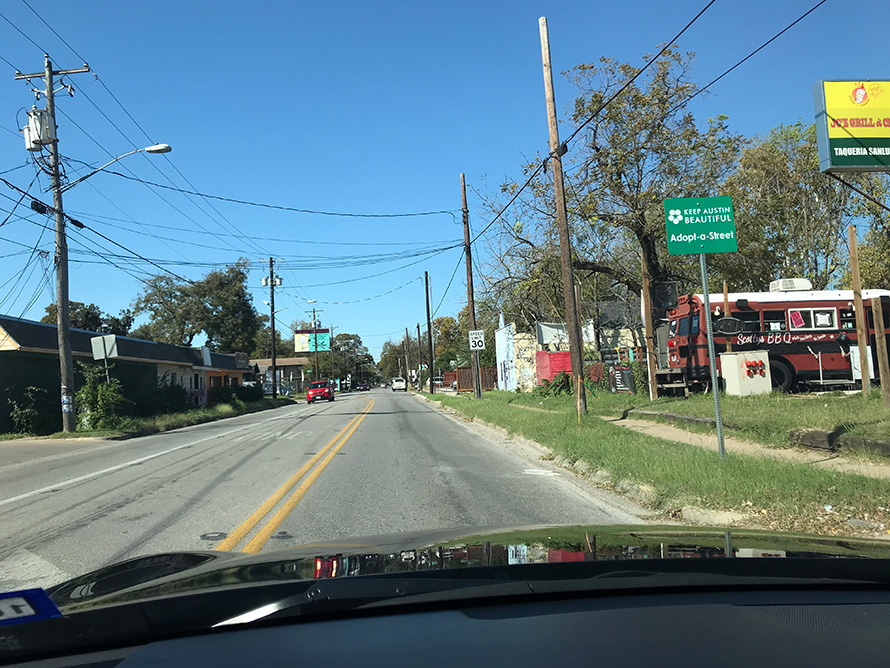 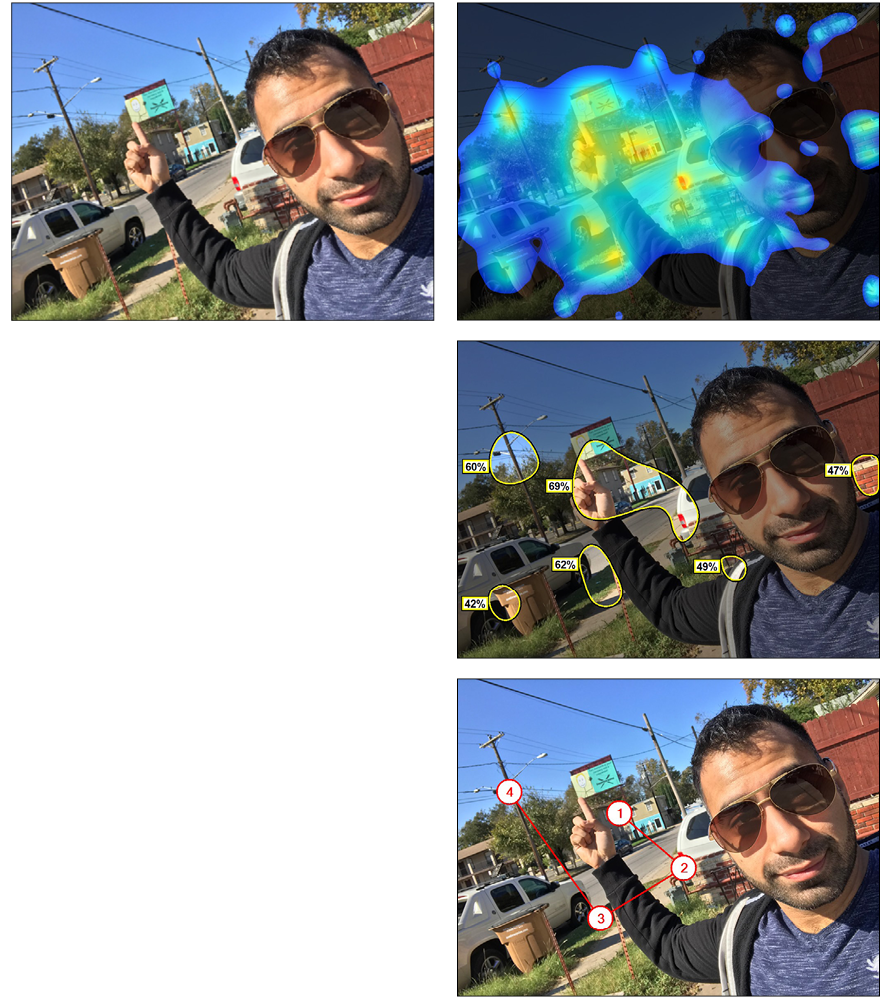 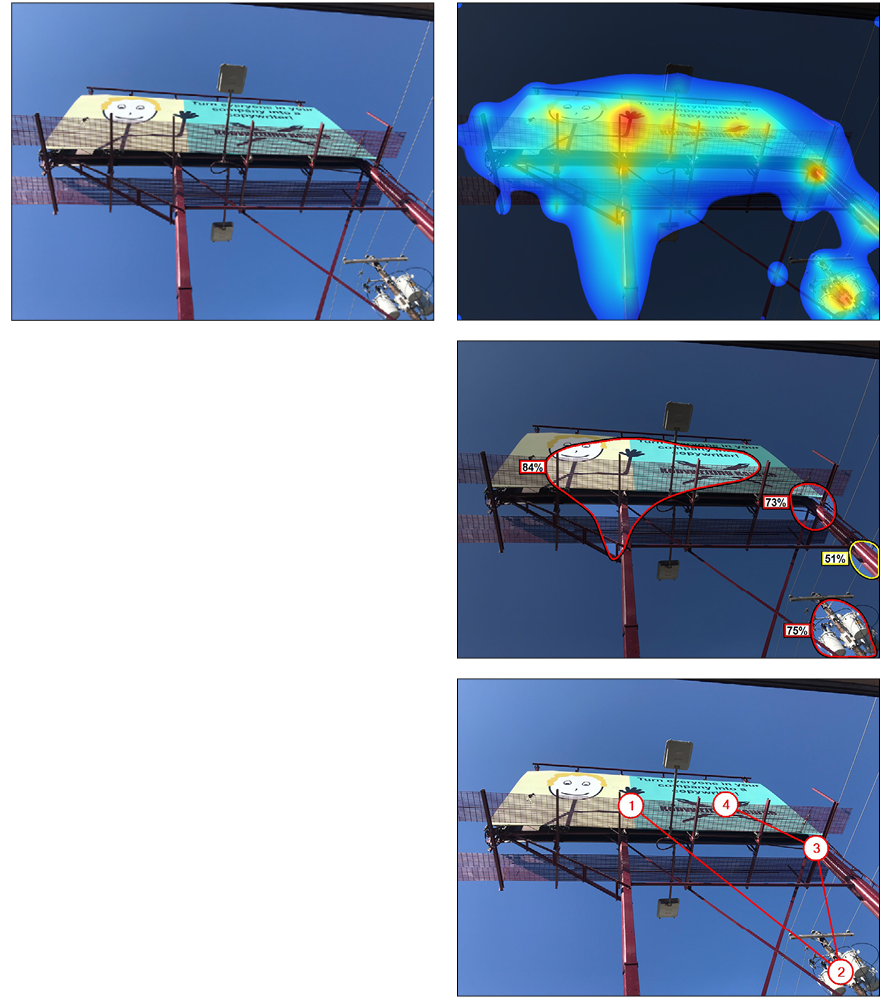 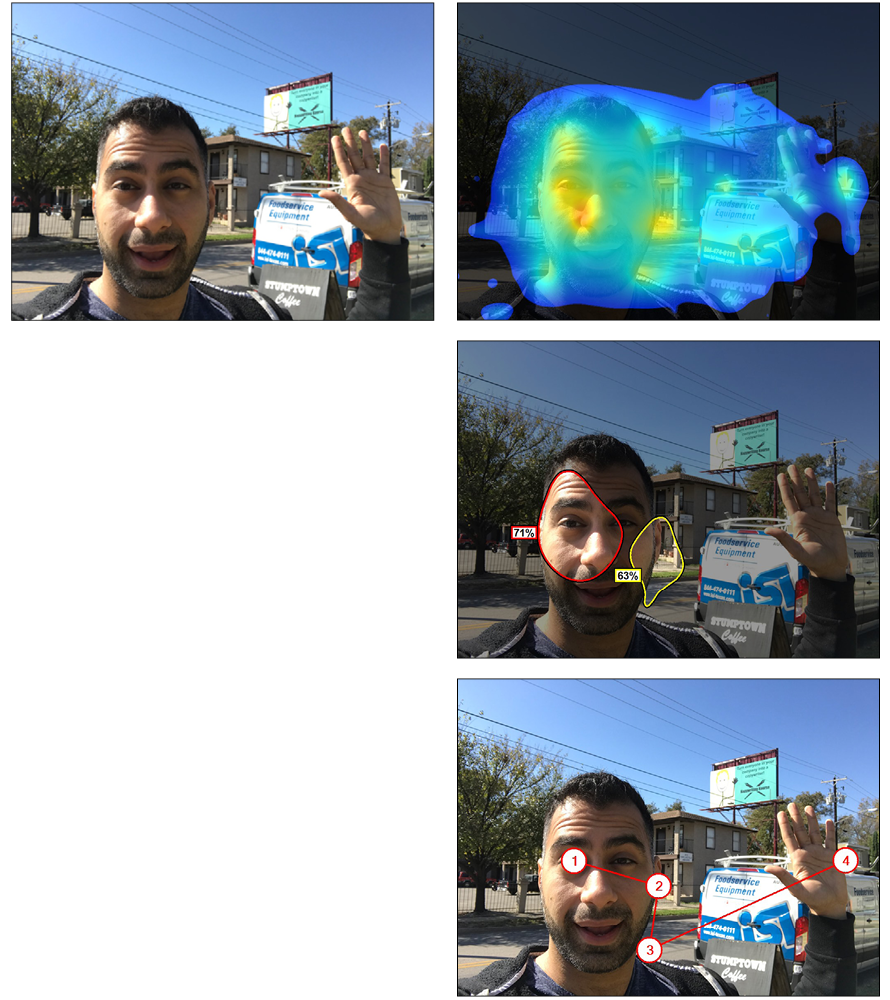 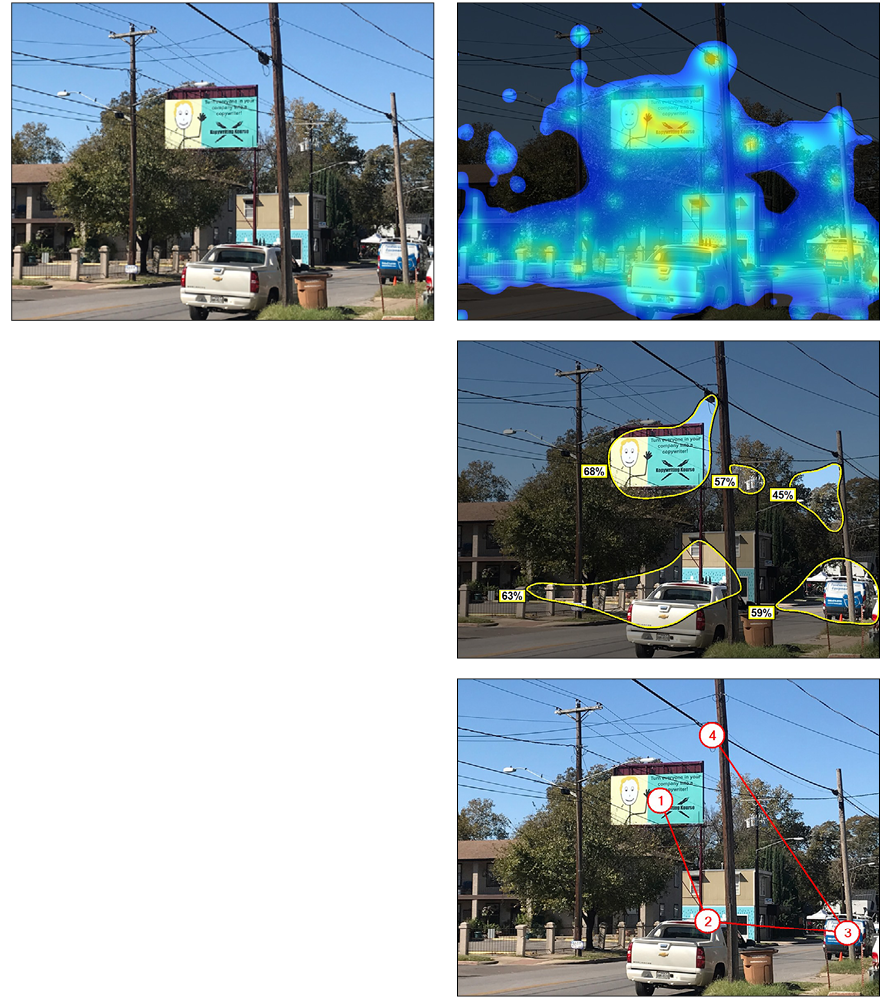 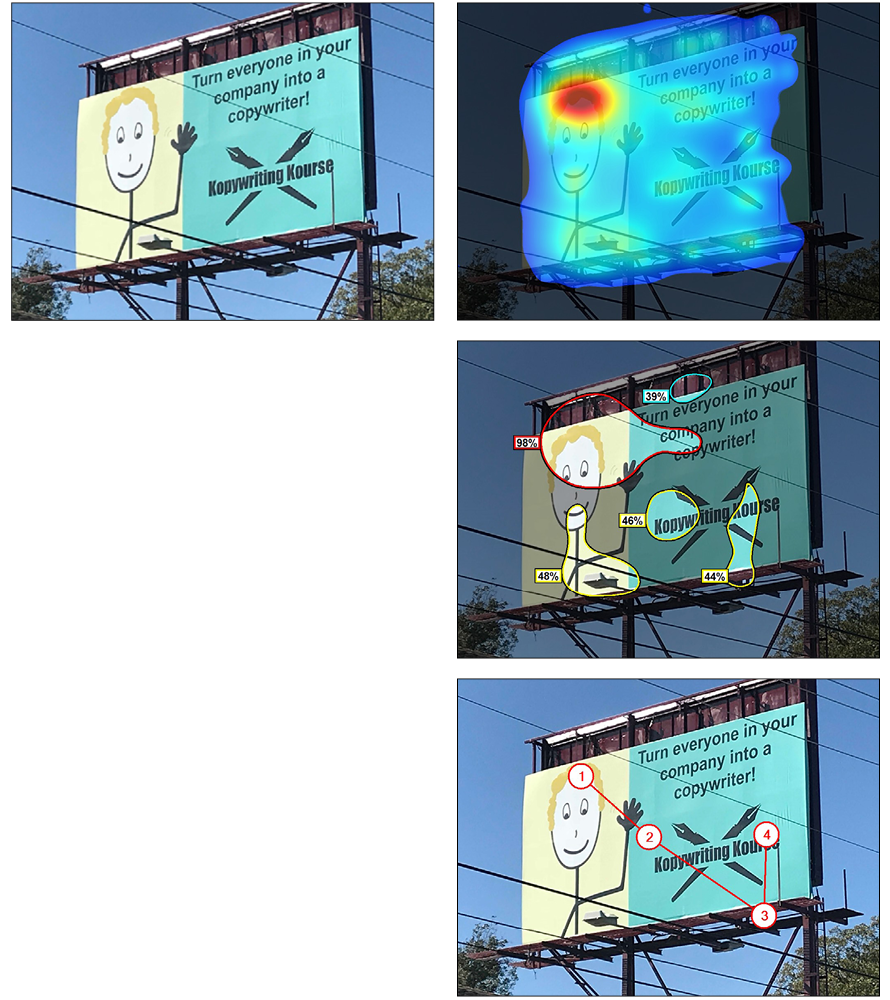 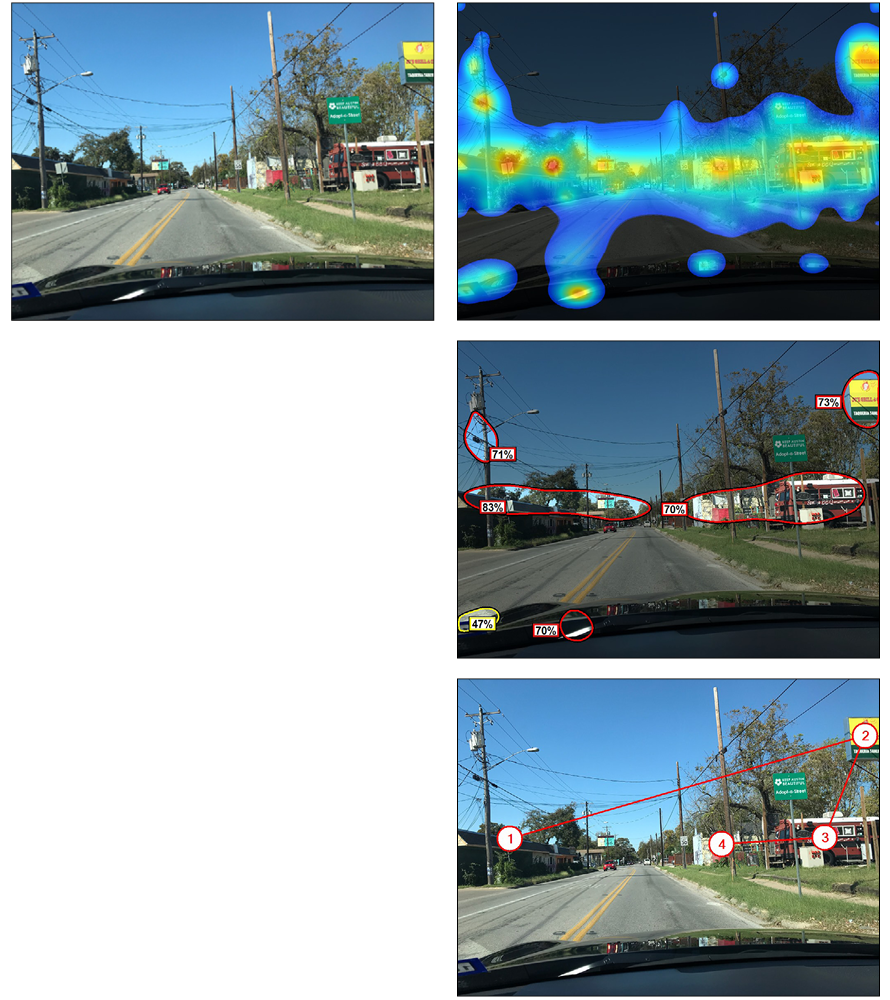 If you’re in Austin, TX. Between Nov. 13th and Dec. 16th you can see this billboard. 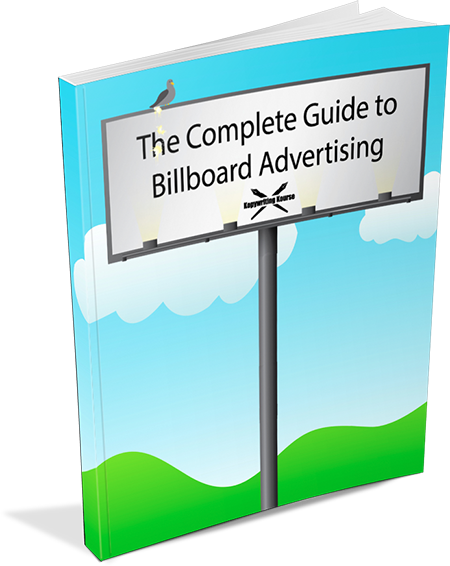 P.S. Have you ever bought a billboard, seen a clever billboard, or designed your own billboard?? Tell everyone about your experience or results here!