Advertorials: How To Write Them & Why They’re Awesome :: Copywriting Course

Advertorials: How To Write Them & Why They’re Awesome

So what the f-heck is an Advertorial, and how do you make a good one?

An Advertorial is an advertisement disguised as a regular piece of content:

Basically an advertorial is when someone pays to have their content in a publication…..and it looks “sort of like a reguolar article.”

So an Advertorial is a semi-sneaky way of writing your own advertisement into the trusted reputation of a publication like The New York Times, Wall Street Journal, Time Magazine, or BuzzFeed.

However simply slapping some advertising into one of these publications isn’t good enough.  People tend to gloss over that.  Rather you want people to actually pay attention to your advertorial, so you have to put some effort into making it seem like a real article.

The way you make a successful advertorial is by making 70% Good Content, and mixing it with about 30% Promotion Of Your Product.

Let’s go ahead and checkout some examples of this…..

Examples of Advertorials throughout the Internets:

Let’s take a sneak-peek at how advertisers around the internet are using advertorials.

Essentially the goal of their advertorials is to piggy-back on the popularity of a publication. Here’s a video explaining:

Here’s an article in Forbes about employer pension buyouts (goddamn that sounds boring)…..but guess what, it seems a little company named Fidelity (a stock brokerage and financial firm) has sponsored it!   I’ll place a bet that somewhere in that article the Fidelity company gets mentioned ;)

Looks like BuzzFeed is up to their Listicle-style articles again….and this one is about “Captains, Commanders And Conquerors.”

But it looks like our old friend Captain Morgan (the liquor brand) may have paid a little cash to BuzzFeed to sponsor this post and drive some traffic to their YouTube page. 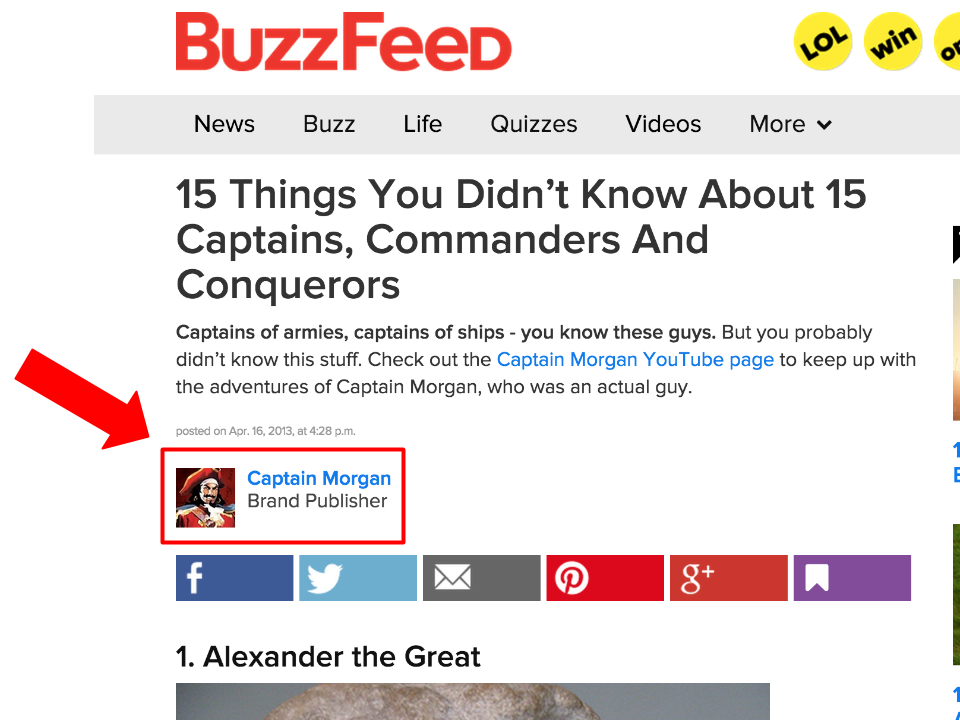 This one made me LOL.  An article in the HuffingtonPost about how Skynet (the artificial intelligence supercomputer in the Terminator movies) is more realistic that you think.

But whaddya know, it happens to be “Presented by Terminator Genisys” right around the time the movie is being released.

A nice way to get in front of a non-traditional audience: 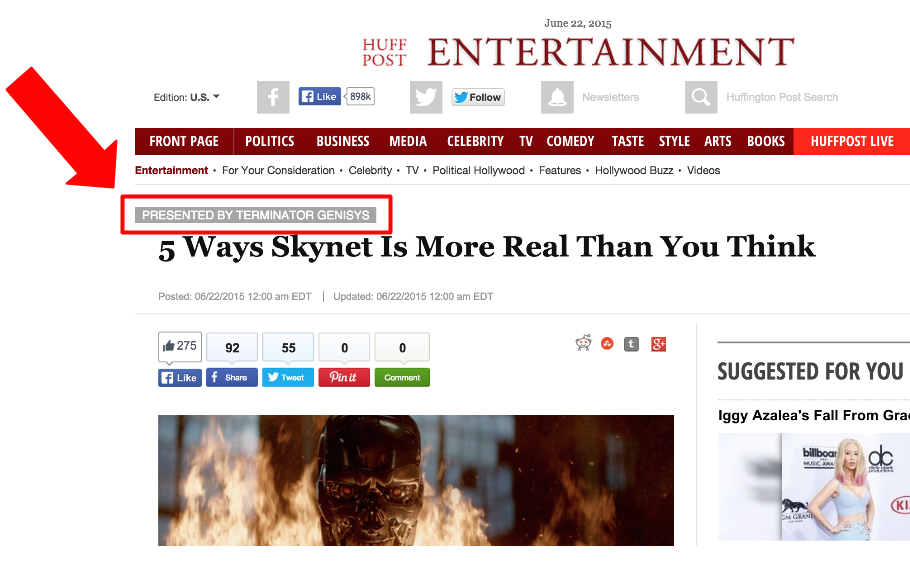 The Thrillist site put out a catch “Worst Office Lunches Ever” list, and whhhaaadddyyaa know, it’s sponsored by Friday’s!

I somehow think Friday’s might be pimped out in this article as a GREAT place to eat.  Just a hunch ;) 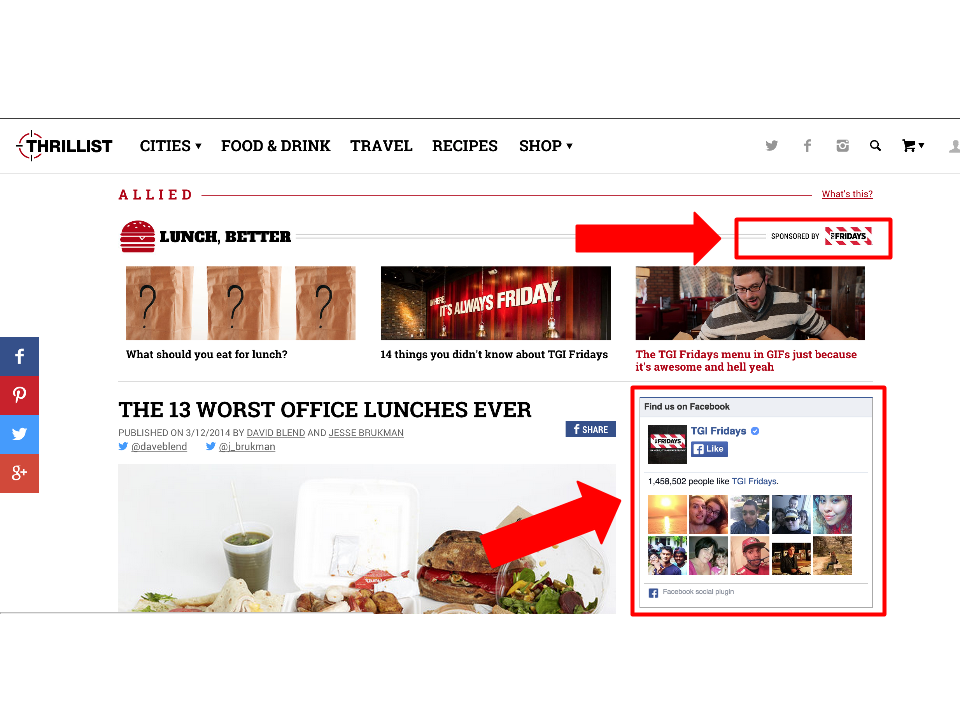 Even the satire magazine/website The Onion is inside on the advertorial game (Or “Sponsored Content” as it’s often called).

Here’s an article about productivity, sponsored by Starbucks……who happens to sell A LOT of “productivity juice” worldwide: 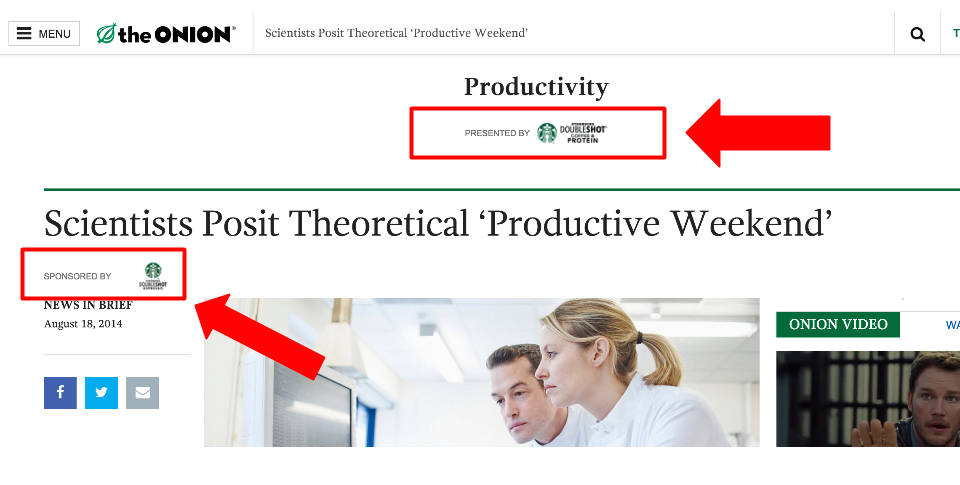 Our good friend the New York Times is posting some advertorial content here, this time sponsored by NetFlix.  In particular this article is about a women’s jail……and WHADDYA KNOW…..The show “Orange & Black” made by NetFlix is sponsoring it, and in the article they mention it:

As you can see, the advertorial is just a clever way for sponsors to get their products in front of audiences in a different way.

For the most part this advertising is benign and benefits both sides…..but this can become controversial for some areas. Imagine a pharmaceutical sponsoring an article in the New York Times telling readers “The best way to reduce your cholesterol levels is by using OUR medication”.  That can raise some moral issues.

The devious bastard (and advertising great) David Ogilvy was doing advertorial-style content a looonnggg time ago.  He knew that if a consumer saw an ad that BENEFITED them, they would pay attention, and even rip it out of the magazine.

For example, he made this Rinso Detergent ad that did better than any other detergent ad, ever……because it was so easy for housewives to tear out of the magazine and keep in their laundry rooms: 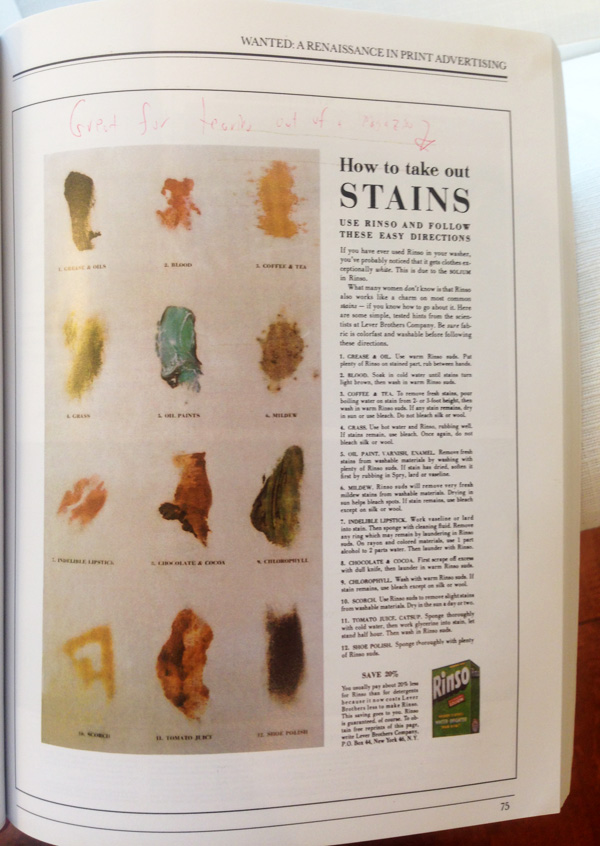 Even the very first ad David Ogilvy wrote as the head of his own agency was this one for Guinness.

Not only was it an advertisement for Guinness, but people used to tear it out of the magazine and keep it.  Restaurants would even display this ad for the patrons to help pair oysters!

By giving out great information in the ad, he was able to make it WAAAYYY more effective: 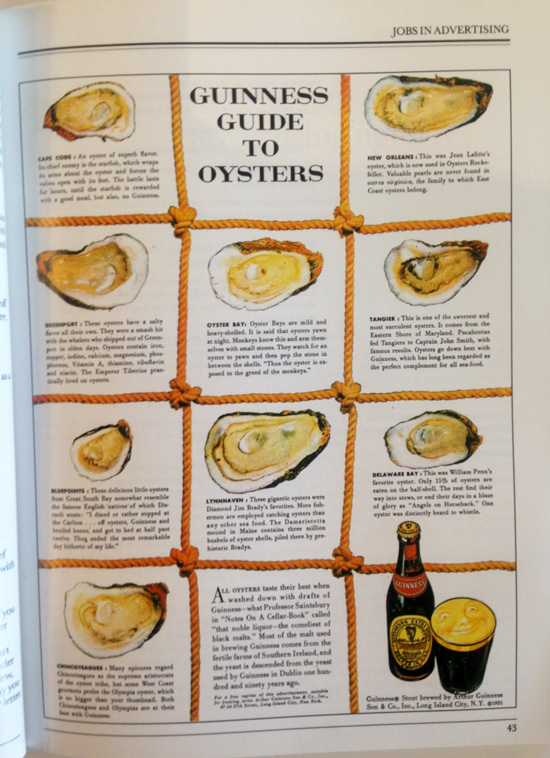 See how BEING USEFUL makes the content go so much further?

Modern day advertorial writers can learn a thing or two from the master himself!

Why an advertorial works awesomely:

With an advertorial you get to borrow the credibility of the site/magazine/newspaper you’re publishing in.

In fact advertorials are actually kinda sneaky (which is why they stir up some controversy in the journalism community) because the bulk of people somehow associate something BEING in a credible publication as AUTOMATICALLY BEING CREDIBLE: 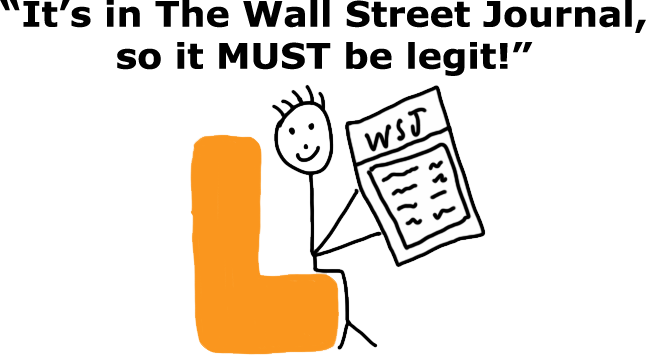 For this reason advertisers love Advertorials because they automatically seem “credible” by subtly being integrated with normal content.

How to write an advertorial:

To write an advertorial you have to be in a giving mindset.

You see, if you’re going to pay for an advertorial, you want those advertising dollars to go a looonnggg way.  And to do that, you make people LIKE your article.  You make them ENGAGE with it.

Don’t be Spammy Sarah who just throws in blatant advertising nobody likes: 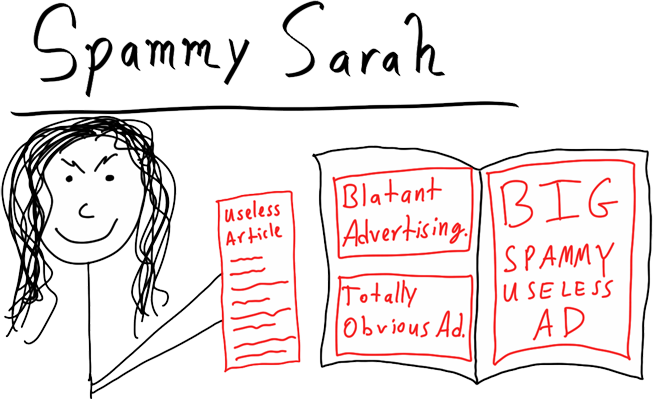 No no no….you want to be more like Giving Gary who GIVES AWESOME CONTENT, and slightly blends in the sale: 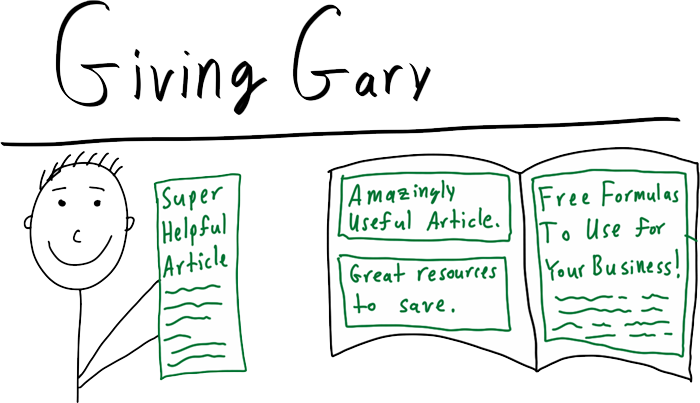 Giving Gary strives to give even better information than the actual publication gives!  That’s why everyone likes his stuff.  Whilst he also mentions his product in advertorial, no one minds because he gives at least 70% great content, and less than 30% sales pitch.

At AppSumo we’d send out tech deals to over 750,000 people, and people loved them because we didn’t JUST try to sell them something.

We’d craft a great story or “how-to” around the sale.

This meant 70% of the article would be about the benefits of the product, how to use the product, and other cool benefits you’d get by having it.

Then less than 30% of the article would be pitching the actual deal.

You can see this 70/30 ratio here on a sample AppSumo deal:

Because it’s actually an interesting read, people are more likely to:

You can browse some popular publications here to see their own advertorial guidelines.  A lot of them call it “Branded Content” or “Sponsored Articles”.   Essentially it means you pay to get mentioned on their sites.

So let’s say you’re sitting at your agency and the boss comes in and wants “SPONSORED CONTENT” plastered across the web.  Well there’s several ways to post sponsored content (or “advertorials” if it’s an editorial-style piece).

To demonstrate this, I will be using Donnie The Dog.  I dogsat him.  And he’s awesome: 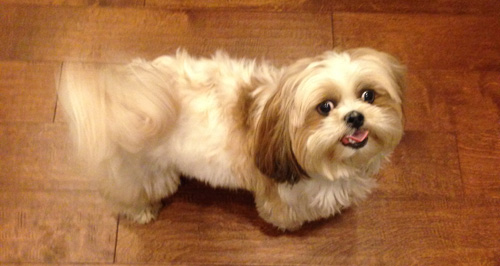 So let’s roll with Donnie, and try to sell some Purina Puppy Chow:

Example 1: A normal banner-style ad that tries to get people to buy: 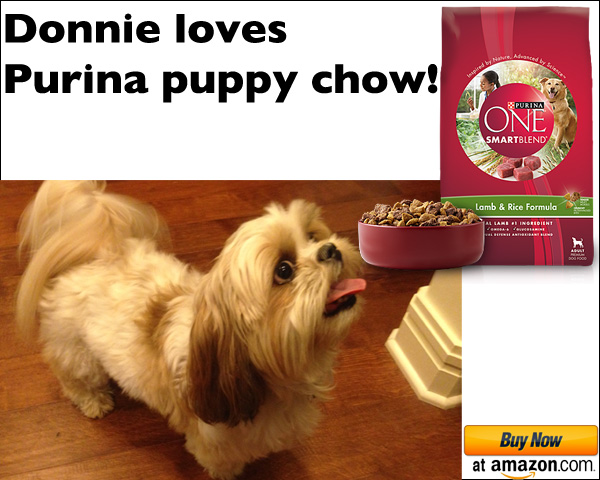 These can work well at getting people to buy something right away, but generally this will have a very low conversion rate unless the article someone is reading is directly along the lines of “What’s the best dog food” or something similar.

I’m just going to ignore some of the ethical questions risen by sponsoring an article like this (as it promotes a brand plus possibly pumps it’s stock).  But just know it happens all over the world:

This would be something like a viral BuzzFeed article that provides some laughs and simultaneously gets the brand exposure: 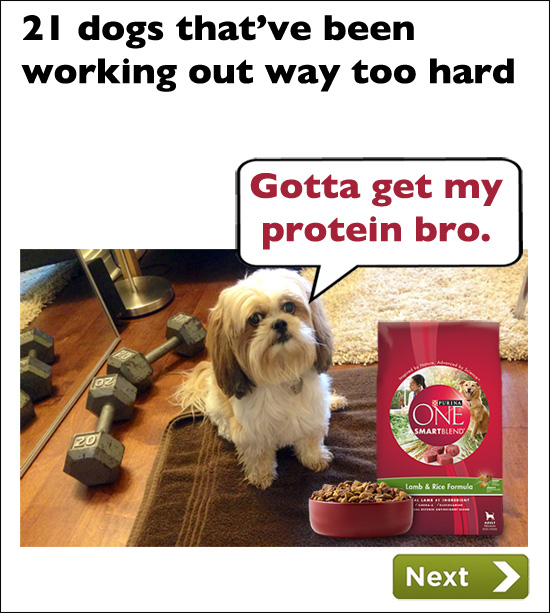 In terms of sheer exposure, these types of posts go a LONG way, especially on social media(Facebook/Twitter etc).  Not only is the article innocently promoting a brand, but it’s also providing some cuteness & fun for the internet.

These types of sponsorships have been increasing MASSIVELY (as seen in examples above), because the social engagement is through the room.

A silly listicle-style article like this can generate millions of views, and tens-of-thousands of “social shares.”

I actually wish that fake “Next” button I made really works so I could see more dogs hittin da gym! 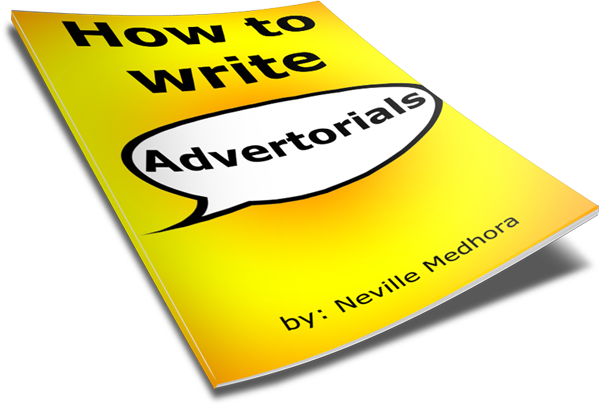 –Get the whole post as a PDF, Word, and Google Doc to your email–
–Send it to your team members and colleagues–
–Keep it in your files for later reference–