Clickbait Headlines Work For Now, But They’re Going To Die

I spent a full day editing the damn video so I hope you like it :-)

Get More People Buying: Sign up for my newsletter to get more great vids.

“You won’t believe what this old man does after…..”

“My faith in humanity has been restored…..#6 is amazing!”

The formula for these headlines is usually:

It’s more trickery than actual delivering the goods.  And they’re exploiting a part of the human psyche called a “Closed Loop” where people expect to hear a complete thought…..not someone just trailing off.

I made a video about these Clickbait Headlines that will teach you:

This might get you curious about what the hell I was about to say.  Because I left that loop open in your brain….and your brain wants to close it.

“The crazy thing about an alligator is that they……are reptiles not mammals.”

Not as interesting once I “Closed The Loop” huh?

Hell, even I’m sort of the problem!
I teach copywriting techniques to get people to read your stuff.
We have a plugin at AppSumo called KingSumo Headlines that uses a self-learning algorithm to constantly test different headlines.  So we’re part of the problem.

But here’s the main problem which will invariably cause the decline of this kind of headline:

That single statement will eventually (in a few years) decimate this type of headline.

Even one of my favorrriitee news sources (Digg.com) is guilty of this.  Not as egregiously guilty, but still.

EXAMPLE: Checkout this box on Digg.  Quite the clickable headline (which I’ve seen three different variants of because they test these constantly): 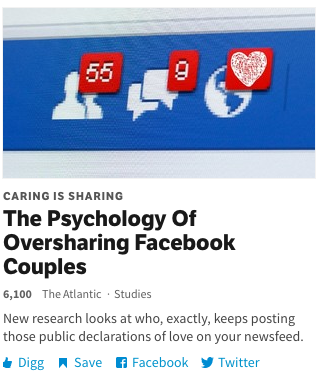 But here’s the actual article it points to…..which is highly disappointing:
http://www.theatlantic.com/health/archive/2014/08/the-psychology-of-oversharing-facebook-couples/376112/

Also the “research” they refer to is highly dubious, misinterpreted, and was “supposedly” performed on just 30 volunteers on a college campus.

This is NOT proper reporting, proper science, or even a good sample size.  Not only that, but the article didn’t even draw any strong conclusions.

Overall my expectation was HIGH.
The article delivered LOW.

That gap is disappointment….or a “meh” feeling.

Now, are these people greedy little weasels trying to exploit people…..well, not really.  See here’s how it happens in the real world.

An article is written.  Let’s say it’s called “People who share too much on Facebook make me sick.”

It’s just a silly rant written by the gossip editor.

So now it goes over to some clever copywriters whose SOLE job is to enter new titles for the content and re-post it.  Like this:

(Upworthy tests a minimum of 25 headlines per article).

So after entering this into a split-testing system (where the computer tries out each headline a few thousand times), the results come in that Title 8 has a 521% high click through rate!

Now if you’re a website whose sole purpose is to sell advertising and therefore you need lots of clicks, THIS is the ultimate jackpot!

Screw how good the article is.  You don’t particularly care so long as people are clicking.  RIIGGHTT?  Well, wrong.

So now that the article is “optimized” for clicks, it goes on to be promoted to the homepage, and blasted out to email newsletters, and tweeted, and gets paid advertisements.  The whole system pushes the article forward.

And yes, that link IS clickable.

And yes there was tons of optimization done to the TITLE of the article, but the article itself got no more love and attention.

Maybe if it answered some basic questions:

But instead the article never got an upgrade.

So you click this MASSIVELY AWESOME HEADLINE on to get a BELOW AVERAGE ARTICLE.

Expect something great, get something average.  You’ve now disappointed someone.   Now, even though that disappointment is not the worst thing in the world…..over time people get disillusioned with this stuff.

Especially smarter people.  Eventually everyone starts doing it, and people get desensitized.

OK OK OK OK…..enough complaining.  What can WE do about this??

We all know headline testing works really damn well.  That’s why these sites use it so much.  And that’s never going away.

Instead we can simply change this equation around:

AMAZING HEADLINE = AMAZING ARTICLE.
You see, this way you get:

If you’re gonna do a sneaky “open loop” title, at least close the loop in the article!!

If we all start doing this, we’ll make the internet a better place :-)

P.P.S. If you want to learn more about writing a proper headline, check these articles out: