How I tripled Yelp’s email response rates with just 3 changes.

She works for Yelp as a salesperson, and this is how she tripled her B2B email marketing response rates with better copy.  Tell us your tips & secrets!

As a salesperson for Yelp, I noticed that there was a lot of room to improve our sales email templates. On an average day, I might send out anywhere between 20 to 50 emails. If I got one email response back that day, sadly I considered that a win.

Where was the disconnect? Shouldn’t businesses WANT to be in communication with Yelp? If for some odd reason you never heard of Yelp, it’s the number one online business directory — think of it like the modern day Yellow Pages. We affect businesses on a daily basis and are reaching out to help grow those businesses through advertising.

Eventually, I realized what was holding us back and preventing higher response rates, our salesforce sounds like a bunch of robots…like little Yelp Robots, with no personality, being manufactured and churned out….. 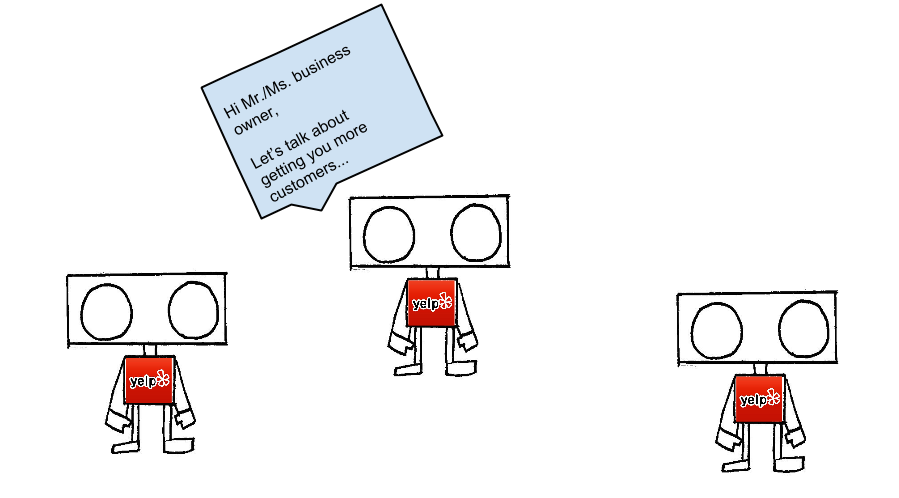 Yelp’s emails don’t sound like a person wrote them. Therein lies the problem. People don’t feel the need to respond to generic non-human sounding emails like this……… 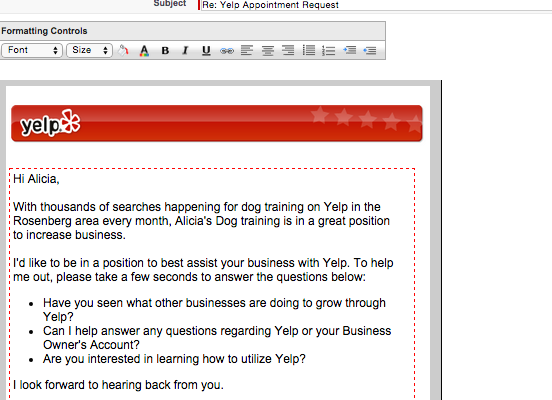 This is understandable, because you don’t feel like someone is actually waiting for you to respond. What would happen if a business owner knew or felt that an actual person was waiting on the other side of that email? Wouldn’t they feel more compelled to respond?

My First Try at Customizing Emails:

I started writing more customized emails, and surprisingly business owners would respond. Whether it was positive or negative, I didn’t care. All I wanted was a response. My main goal when crafting emails was to convey that I’m human and waiting for them to get back to me. Showing that you’re a real person also builds a sense of urgency. 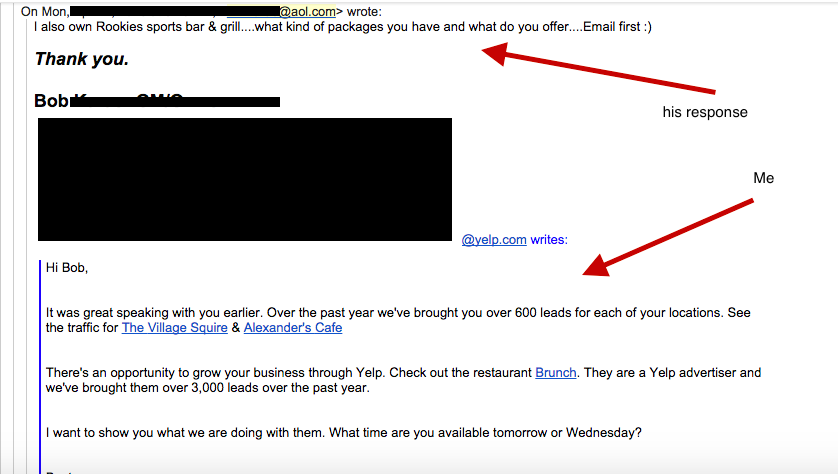 After sending out a few successful custom emails, I came up with a formula for crafting effective sales emails:

Now let’s use the above email to see if it passes the test:

Feature: Linked to his restaurants’ Yelp pages.
Benefit: There’s opportunity for him to grow his business through Yelp.
Value: Over the past year we’ve brought him over 600 leads.
Human Factor: I had a leg up because I had spoken to him briefly over the phone, but he preferred to communicate via email…even though he had NEVER responded to any of my emails prior.

So I added this as the headline, which also added a human factor:

That put pressure on him and made him realize that I waiting for a response!

After a while I pondered, how can I take this to the next level? Then good ole Nev popped into my head. I thought to myself “dang, he could really do damage if he redid all of Yelp’s email templates”! Almost like what he wrote about Uber emails (I guess great minds think alike)!

Anyways, I decide to channel my inner Nev and do an experiment, especially since I love coming up with creative ways of getting people’s attention. For this experiment, I simply sent out 50 custom emails and 50 Yelp emails, then measured which one had a higher response rate.

Guidelines for the experiment:

How I Revamped Yelp Emails with AIDA & FBVH Formula:

Before starting the experiment I needed to come up with a couple of custom templates to use. I did that by taking my most commonly used Yelp templates and giving them some oomph! This wasn’t my first rodeo. I took a crack at cold emailing back in college, which was pretty successful.

Here is one of my most used generic templates from Yelp (fyi I inserted my name and a fictitious business name): 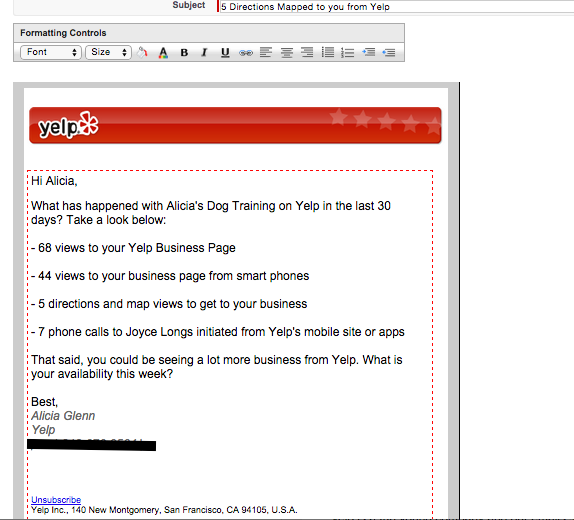 The reason I like this template is because it gives a lot of value and shows the opportunity.

But, there’s something wrong with this email. It almost passes my FBVH formula and Nev’s AIDA formula. I readily use both now when crafting sales emails.

Now as I mentioned, this template TECHNICALLY follows the AIDA formula which covers most of FVBH…but what is it missing? The H…Human factor.

Let’s break it down:

Attention: 5 directions mapped to you from Yelp.
Interest: What has happened on your page?
Desire: You could be seeing a lot more business from yelp.
Action: What is your availability this week?

Now that we determined that it passes the AIDA test and only missing the H in the FBVH formula, we know what to fix. However, the email is also borrrrringgggg, which makes it easy to ignore…

The reason emails need a human factor is not only to make them realize that a real person is waiting on their response, but it’s also to relate to them. It’s possible that the business owner doesn’t know what a mapped direction is, or other metrics you mention to grab their attention. Your product/service could be going over their head.

Most of these business owners are upwards of 40 years old, so the goal is to get them excited and interested in learning about your product/service. I decided to rewrite the email.

Here’s a custom email I wrote along with a REAL RESPONSE from a business owner: 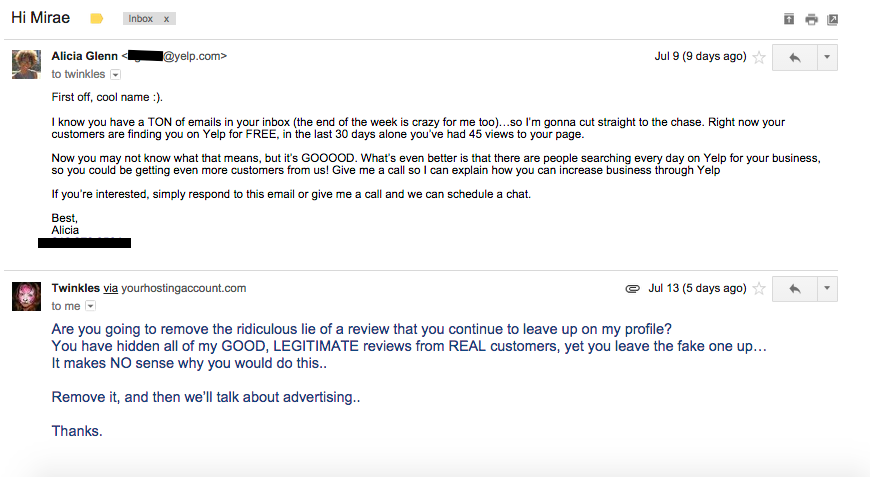 Twinkles wasn’t too happy. Funny response from a lady that runs a kids party planning business (you would think she would be nicer).

Much better right?  just adding personality to your email can make a world of difference.

I also tried a mix of different email headlines:

My headline: [Get More Business] + [Right Now] + [Even If You Have a Small Budget]

Ok, so I’m sure you want to know how everything turned out. The results of the experiment are below….drum roll please….

Results of the Experiment:

Through this experiment I found that while using Yelp’s email marketing templates, I was averaging around a 3% response rate. This was in line with my peers as well. I asked my coworkers about their email response rates, and it was unanimous that they typically send out upwards of 50 emails without getting one response back.

Success! I nearly tripled my response rate and slightly increased my open rate as well!

The benefit of Yelp or any business revamping their sales templates is to get prospects in the HABIT of responding. Right now they are in the HABIT of ignoring Yelp emails because they lump it together with all the other sales emails they get from companies like Yellowpages, Groupon, Seamless, etc.

At the end of the day, generic emails can lead to missed sales opportunities. One of the sayings at Yelp is that “deals don’t get closed over email,” which is true. However, email is a very powerful tool, and if used correctly it can provide an opportunity to reach the DM (decision maker) that you might not have had otherwise.

Now I know my custom emails are probably not Kopywriting gold, but what I realized is that making yourself sound like a human can, and does, make a difference.

These are some MIND BLOWING RESULTS.  Imagine working everyday, sending the same 50 emails, and getting 3X the results by changing the words around??

Let Alicia know what you learned (or any improvement suggestions) in the comments below! 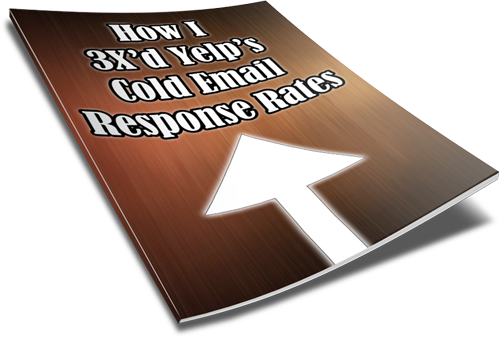 Keep this post in your own swipe file. It contains:
–All the info in this post.
–Full sized (easier to read) images of the examples.
–Your own copy of all the scripts contained in this post.
–A great resource to share with your sales team.

Enjoy it and use it wisely.
Sincerely,
Neville Medhora

Content Marketing Guides:
What Is Content Marketing?
Writing Advertorials
Easiest Font To Read
S&P 500 Company Slogan
Effective Sales Letters
Social Proof
Getting A Sales Page Designed
How To Write A Restaurant Menu
How To Write A Newsletter
How To Write An About Page
How to Get Your Posts Seen
Real Estate Flyers
Make A Target Customer Profile
Get First Photography Job
Content Writing Vs Copywriting

Copywriter Mentality:
What Makes A Good Writer?
What Is Creativity?
Writers Block
Copywriting Quotes
The 90-9-1 Rule of Groups
Process Vs Outcome Goals
Become a Triple Threat
Psychology Of Marketing